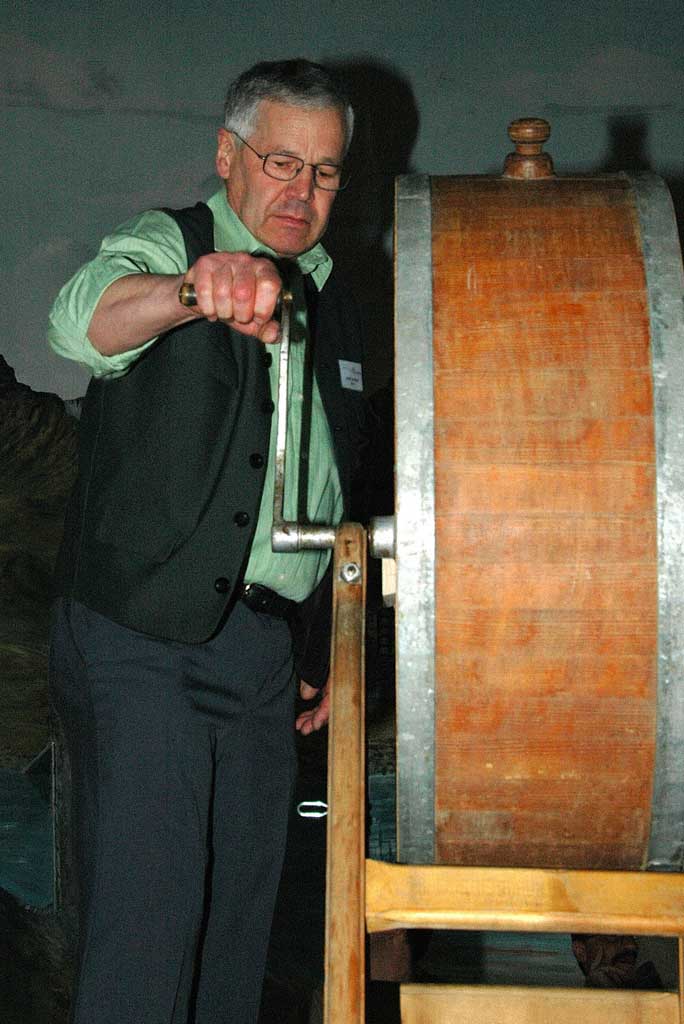 Kerns, April 2008: spinning the balls in a butter churn to draw lots for the alpine cooperatives. © Niklaus Ettlin, Kerns, 2008 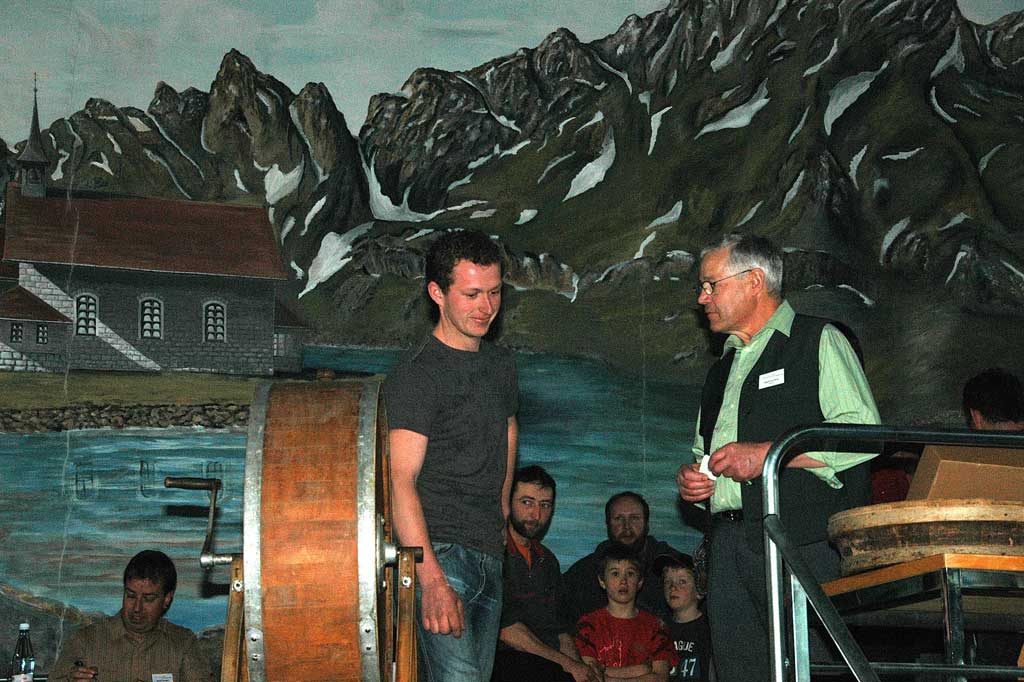 Kerns, April 2008: the clerk of the alpine cooperative (r) announcing the result of the draw. © Niklaus Ettlin, Kerns 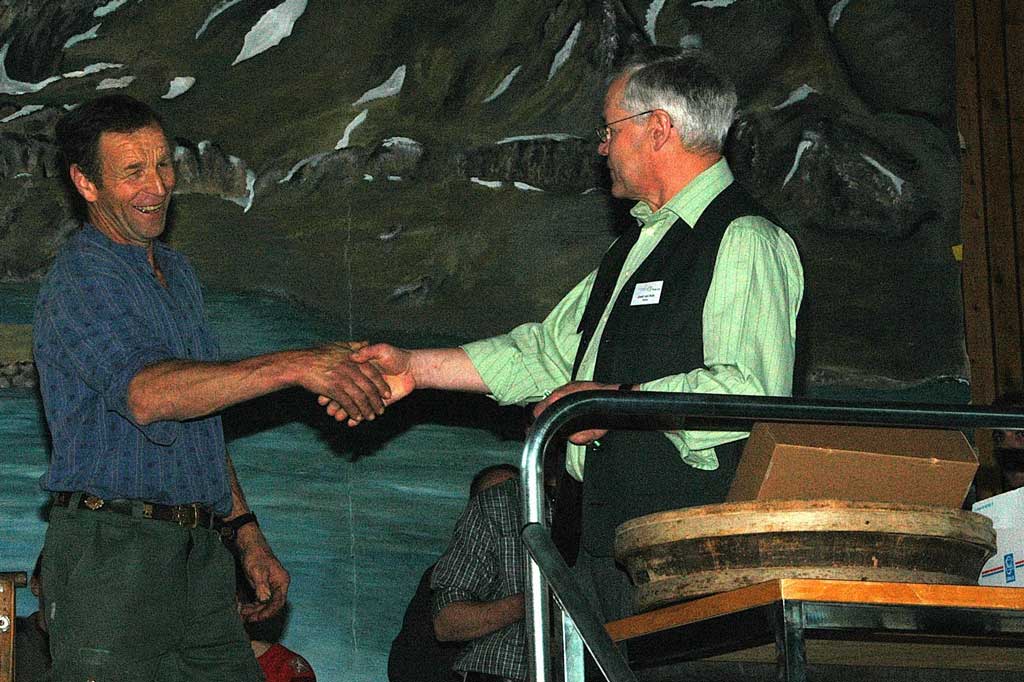 Kerns, April 2008: a handshake between the farmer (l) and the clerk seals the usage rights. © Niklaus Ettlin, Kerns 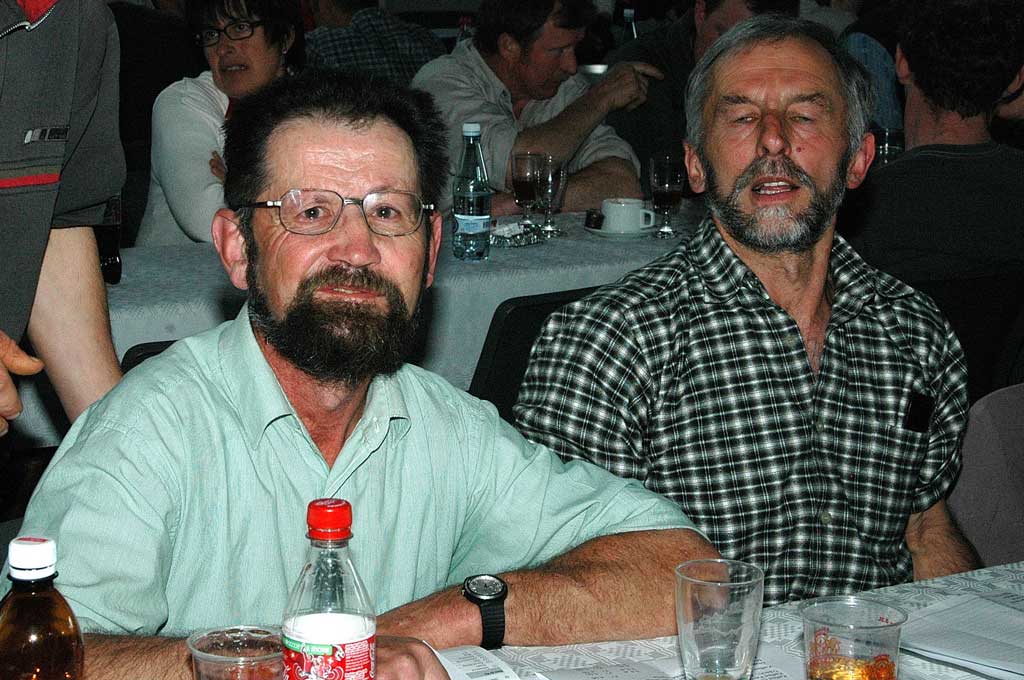 Kerns, April 2008: around a hundred farmers apply for one of the cooperative pasturelands. © Niklaus Ettlin, Kerns

Most alpine farming land in the canton of Obwalden is owned by alpine cooperatives and corporations. These centuries-old organisations are responsible for managing and maintaining pastureland. They decide who can use which pastures and stipulate the conditions and duration of that entitlement. In five of the seven municipalities (Giswil, Kerns, Lungern, Sachseln and Sarnen), individual alpine pastures are allocated – where demand is greater than supply – by drawing lots. In Kerns, for example, eight different cooperatives and corporations share out a total of 4,653 hectares of pastureland, which according to current alpine law can be farmed by the same person for twelve years. The members of the cooperatives and corporations meet in a large restaurant dining room or even at a multi-purpose leisure centre to draw the lots. The procedure varies from community to community – in Lungern it consists of rolling dice, while in Kerns balls are drawn from a butter churn. The draw decides whether it’s all or nothing, whether a farmer gets fertile or non-fertile pastures – in short, it determines the economic prospects of the members’ own farms. At the last draw in Kerns in 2008, more than half of the applicants went away with nothing. As a result, they were forced to make other arrangements for their animals during the summer grazing season, such as purchasing summer grazing rights on someone else’s pastures.