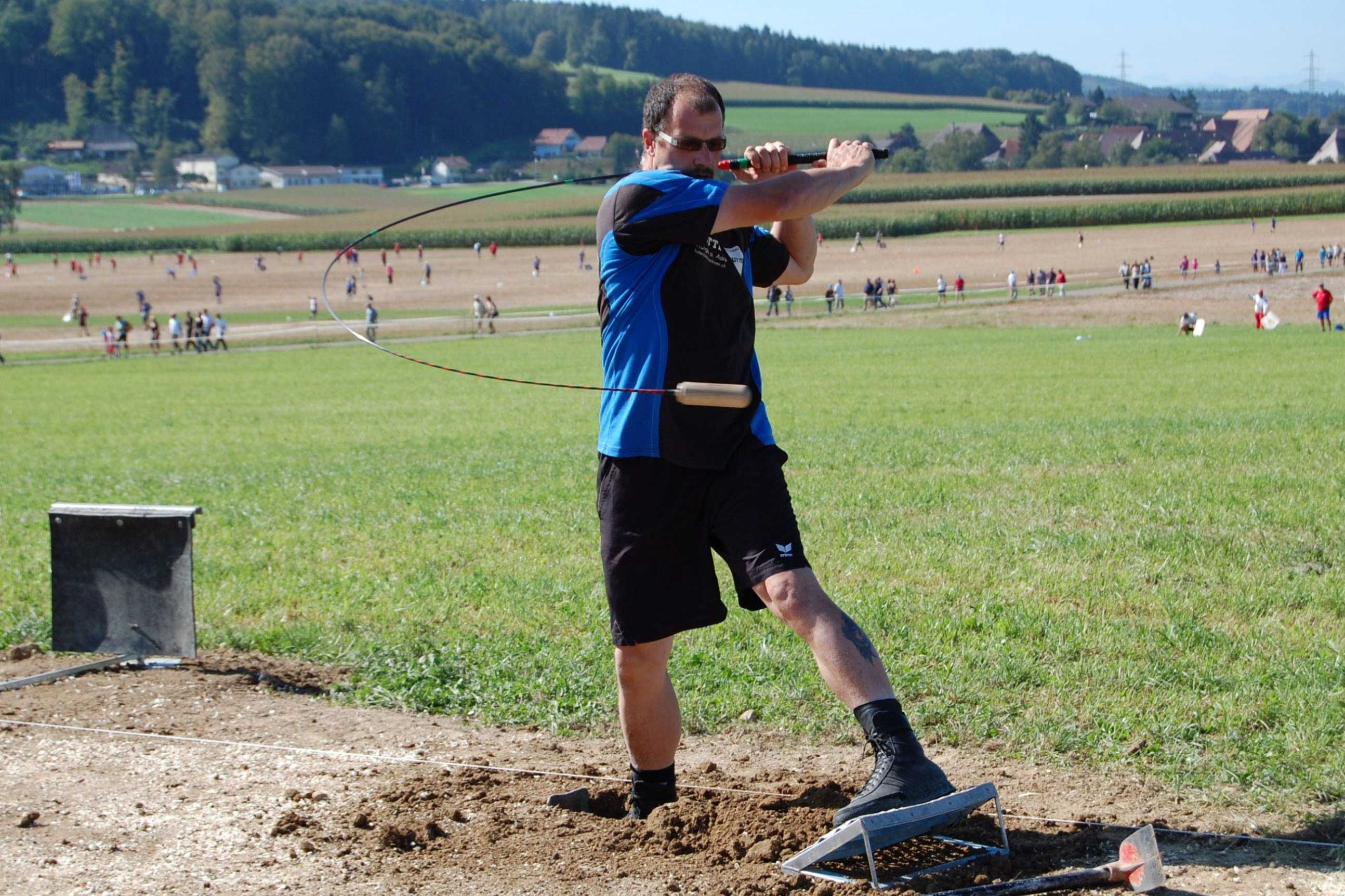 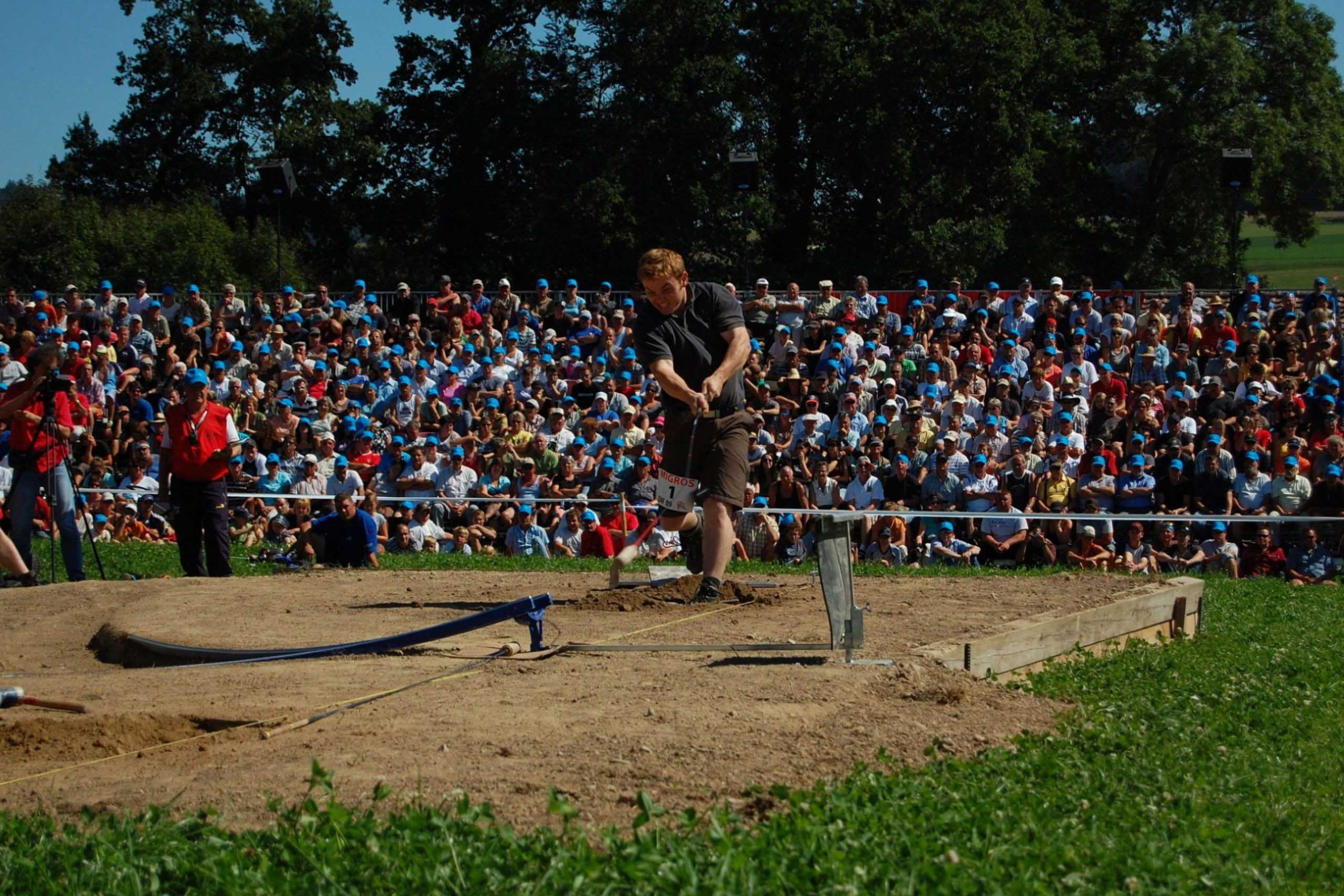 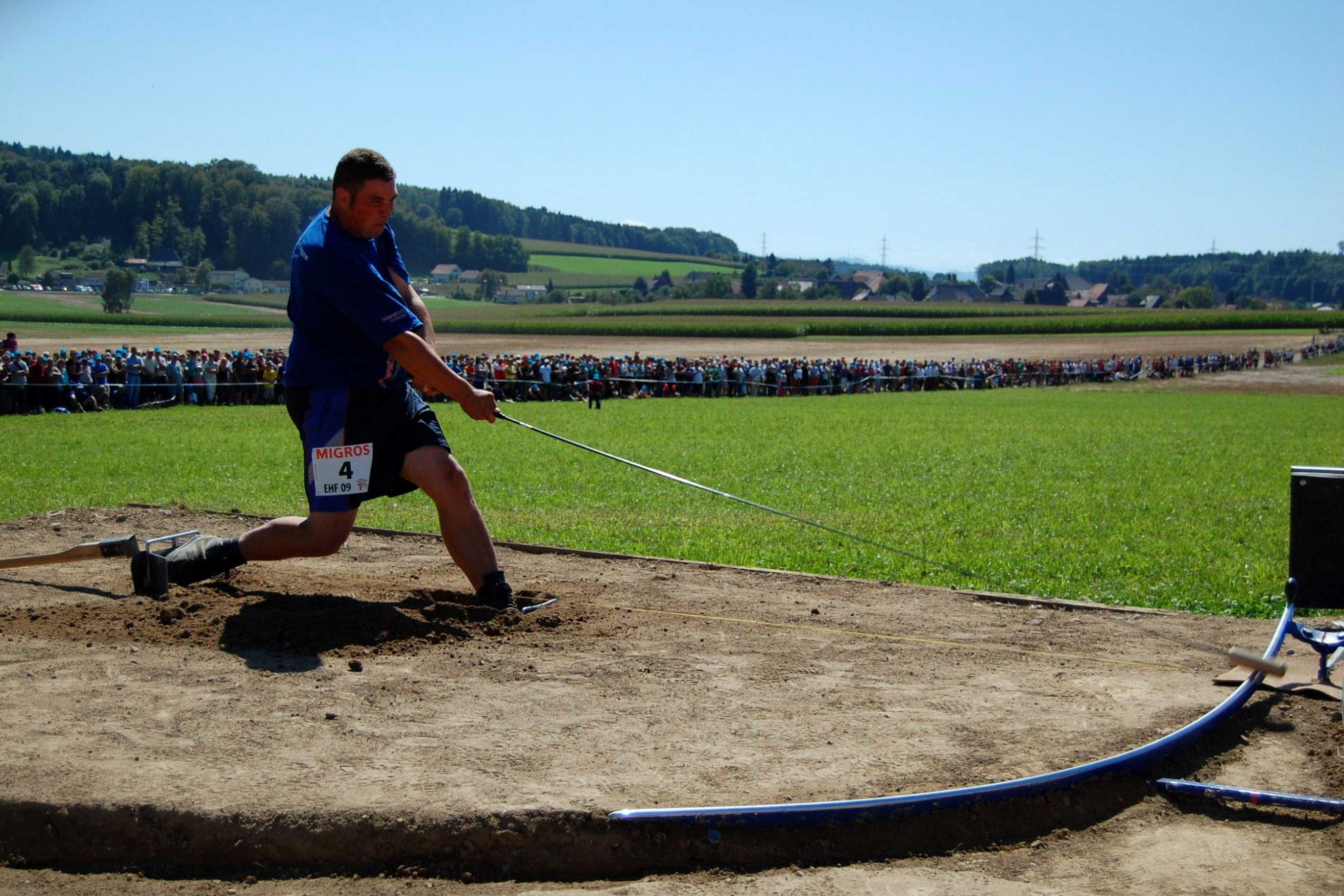 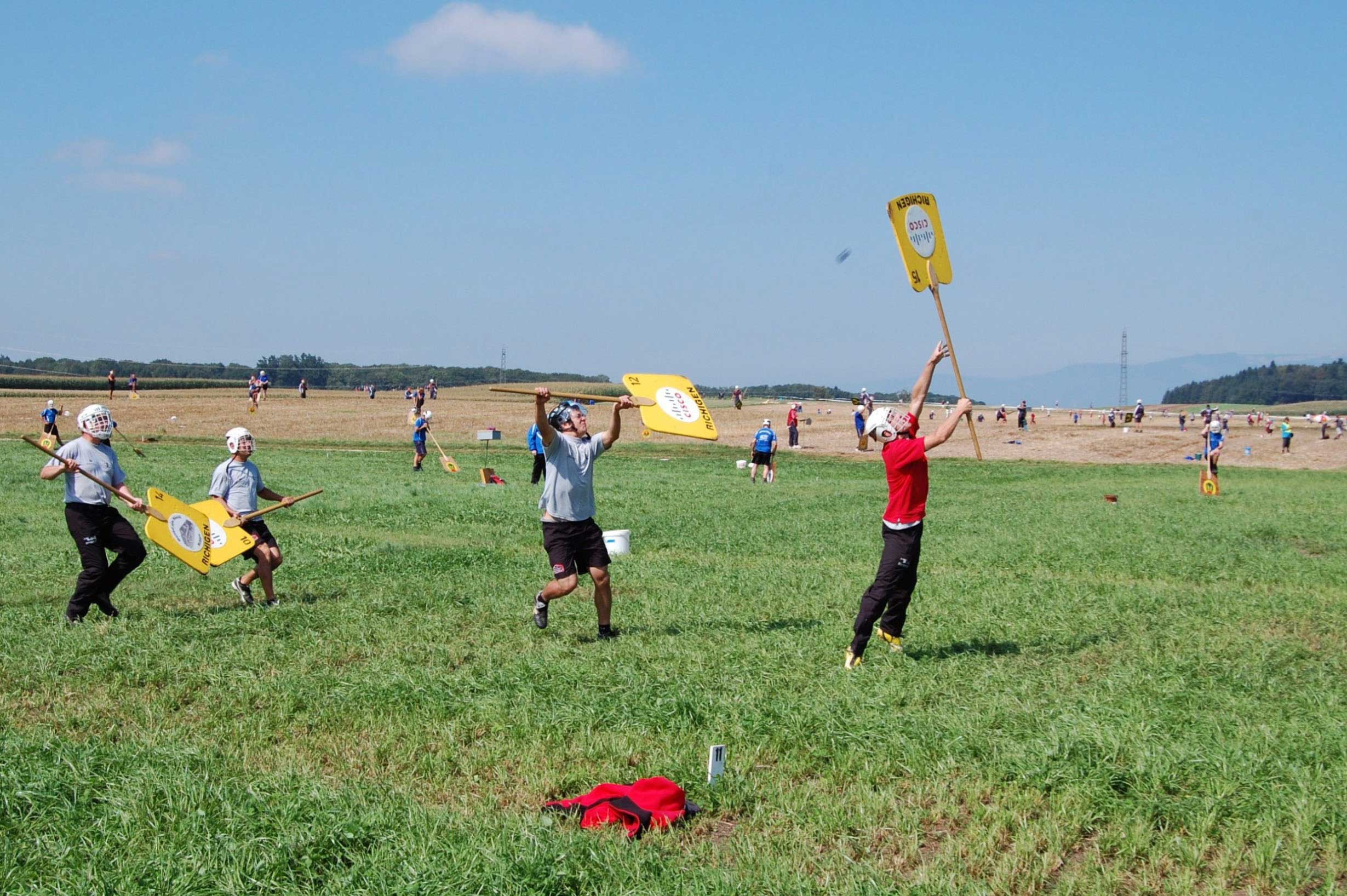 If the first defender fails to intercept the Hornuss, hopefully other team members behind will step in © Jürg Lysser/Eidgenössischer Hornusserverband 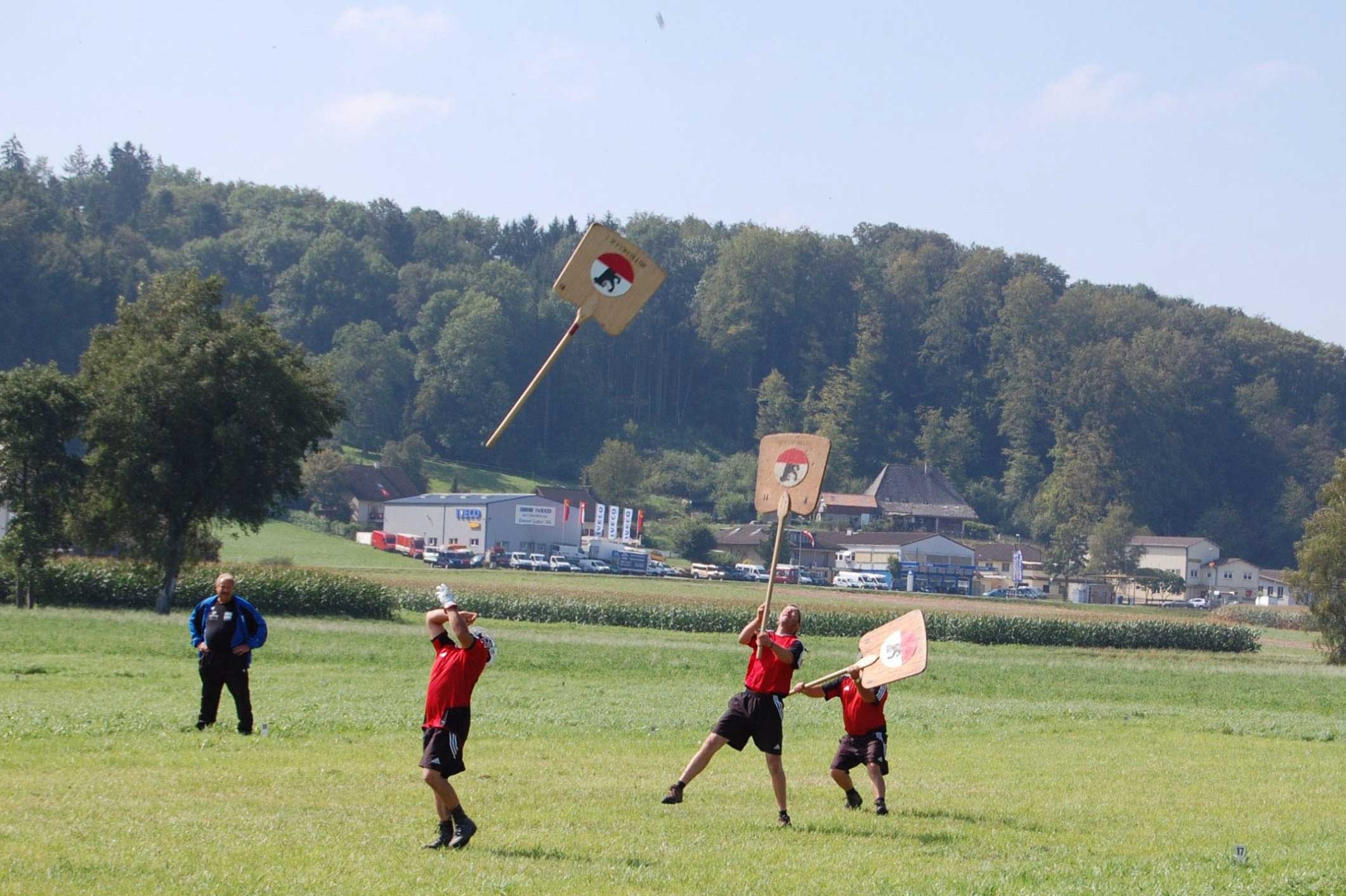 The first defender has propelled his defence board upwards, the second is ready to punch the Hornuss away and the third is crouching to defend © Jürg Lysser/Eidgenössischer Hornusserverband 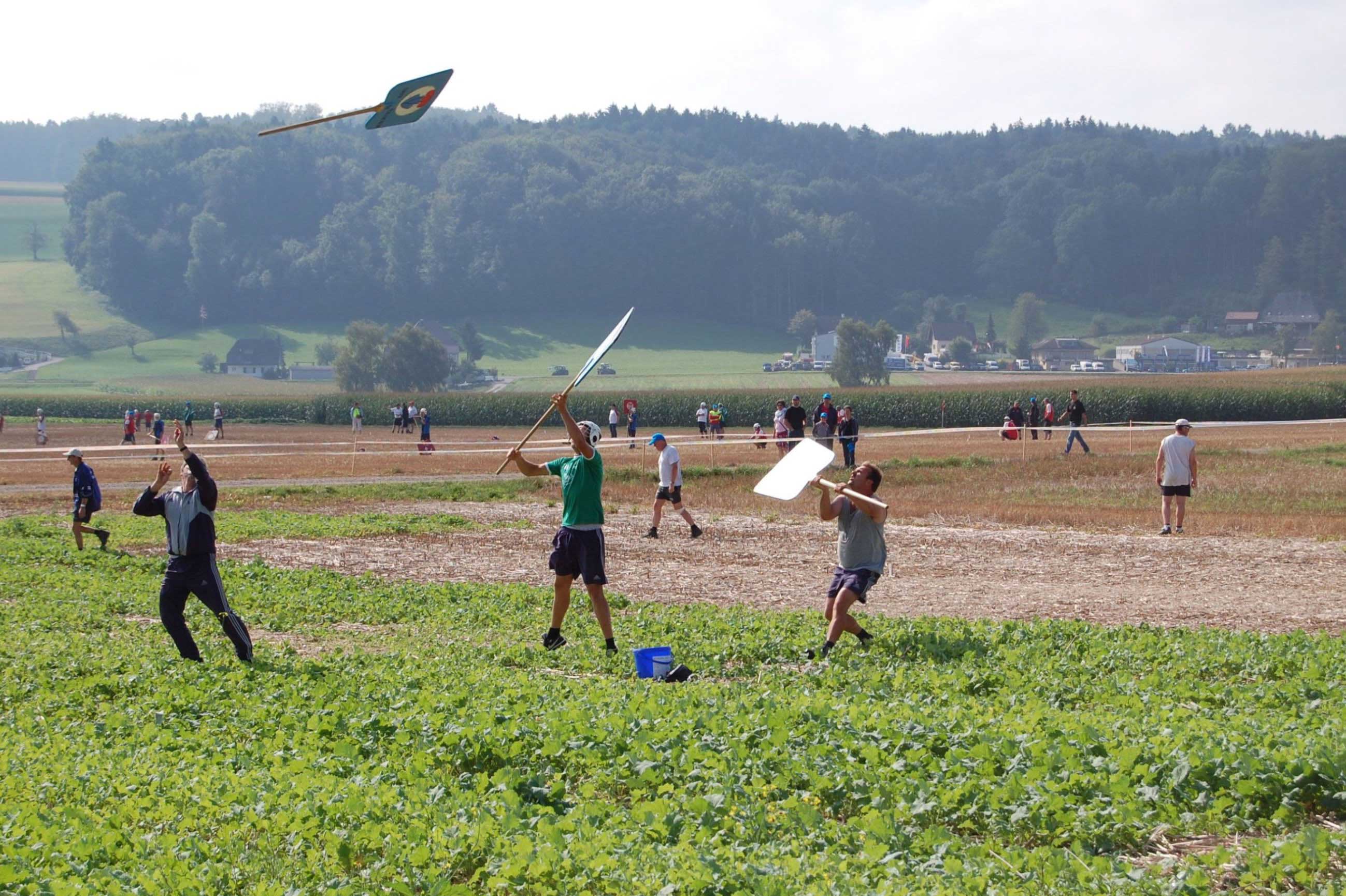 Good defending: Propelling upwards to meet the Hornuss and crouching to catch it © Jürg Lysser/Eidgenössischer Hornusserverband 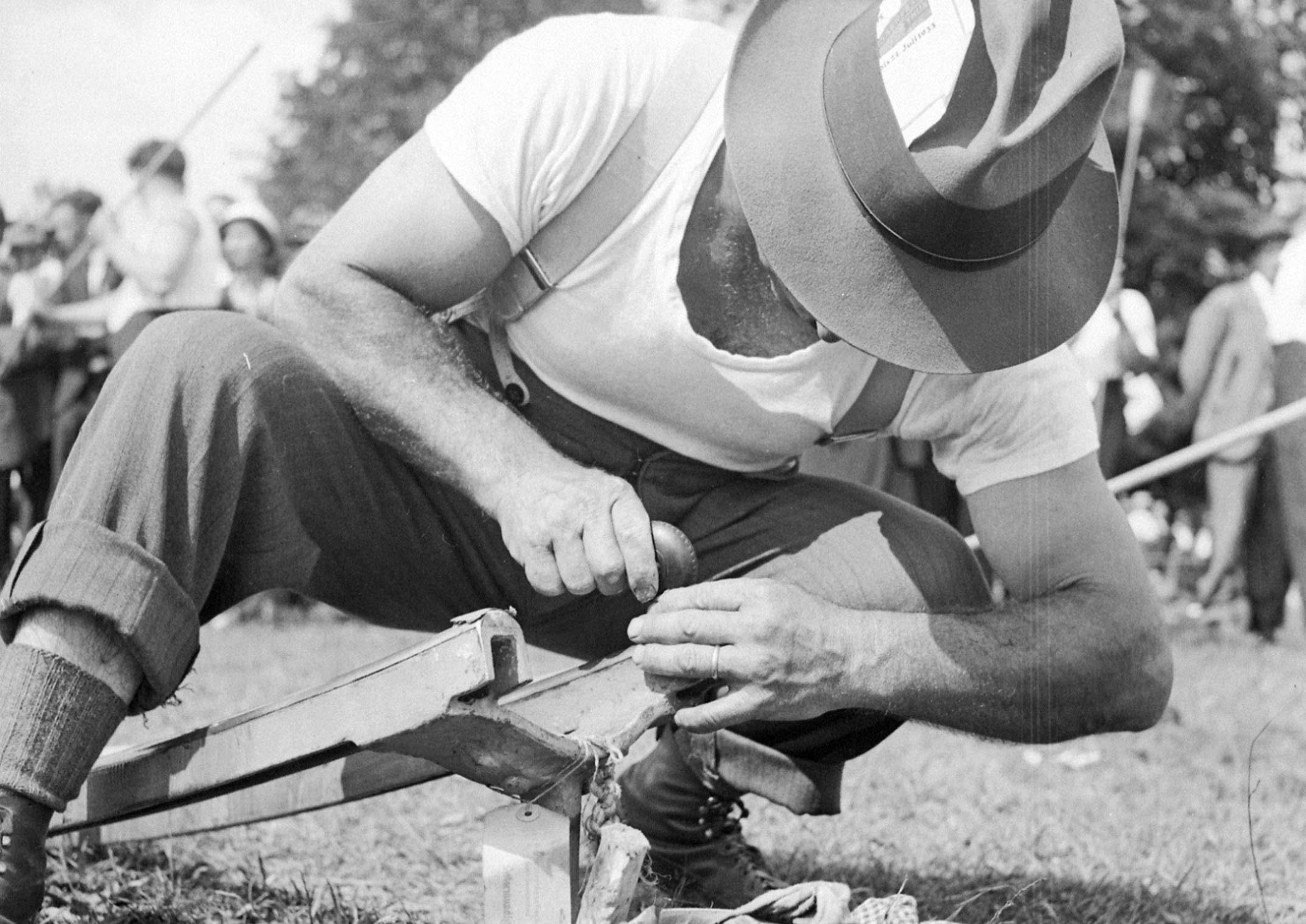 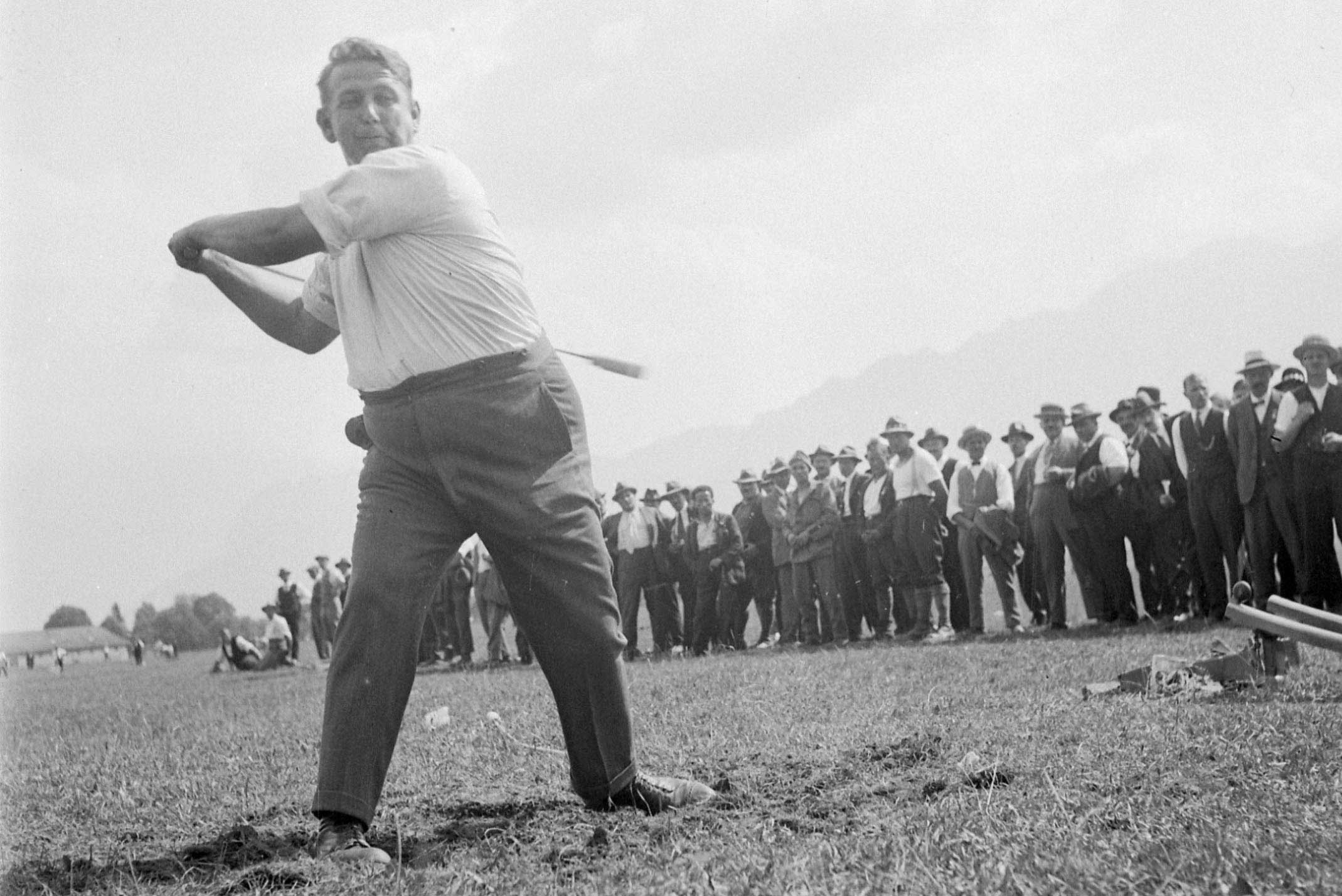 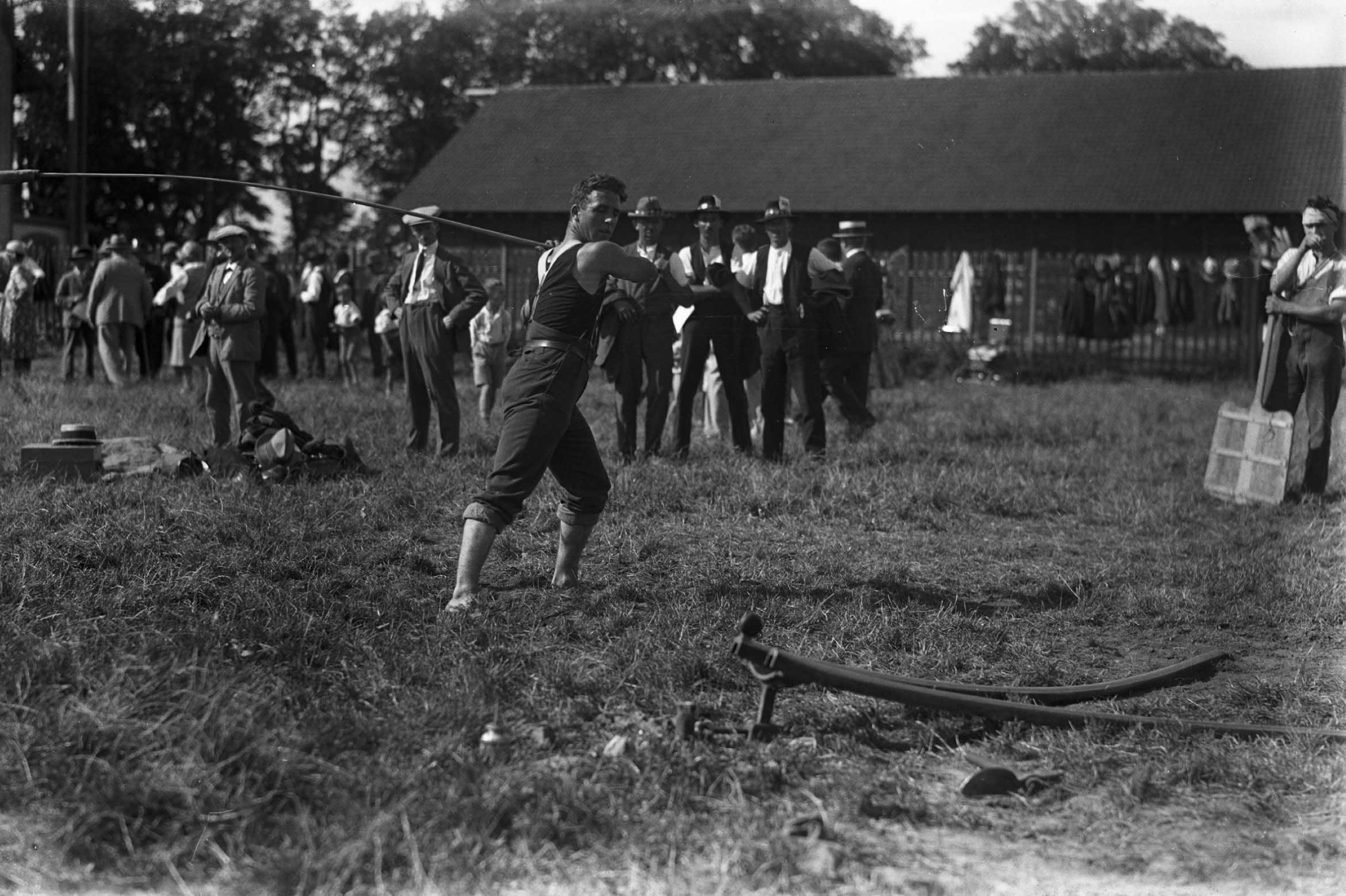 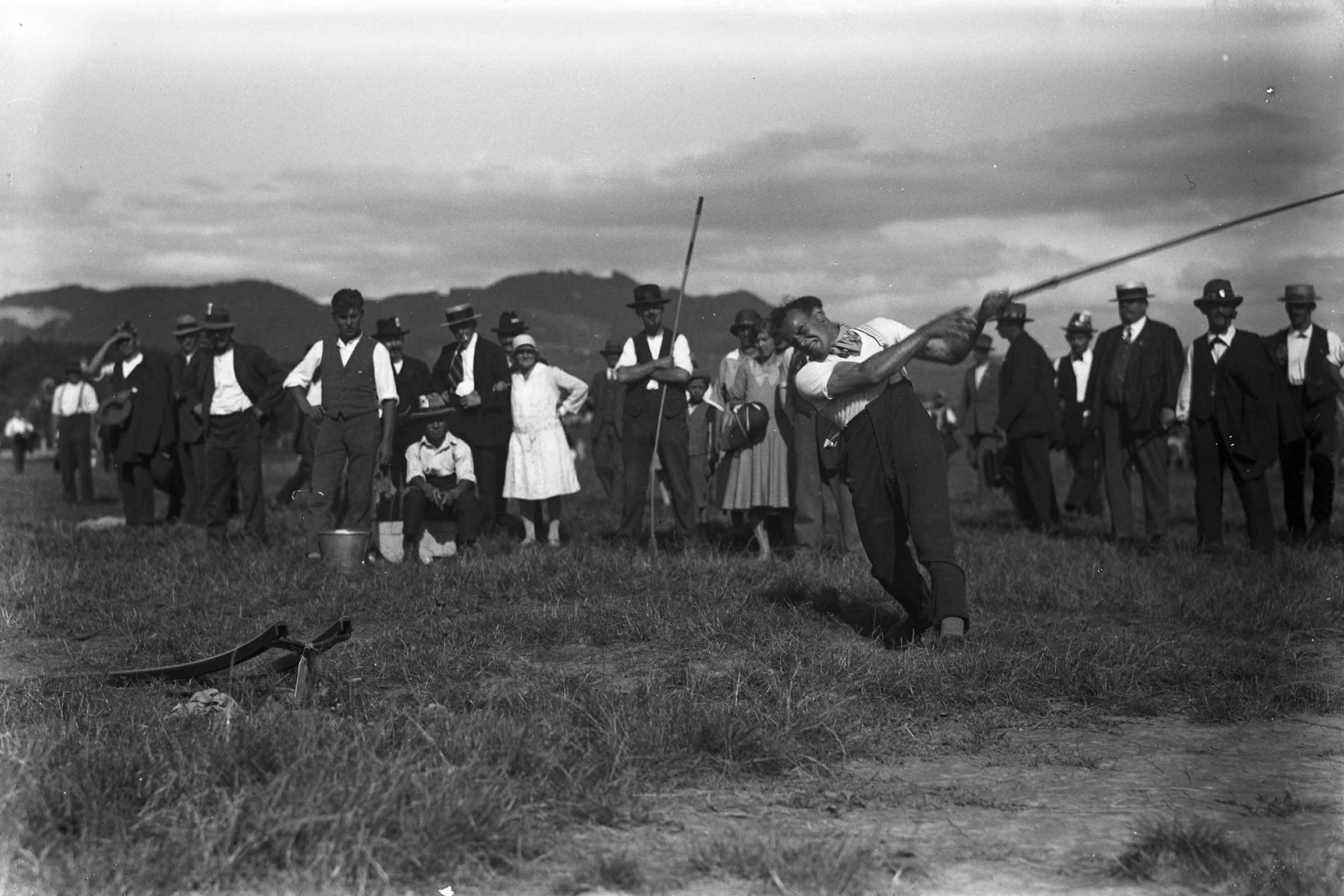 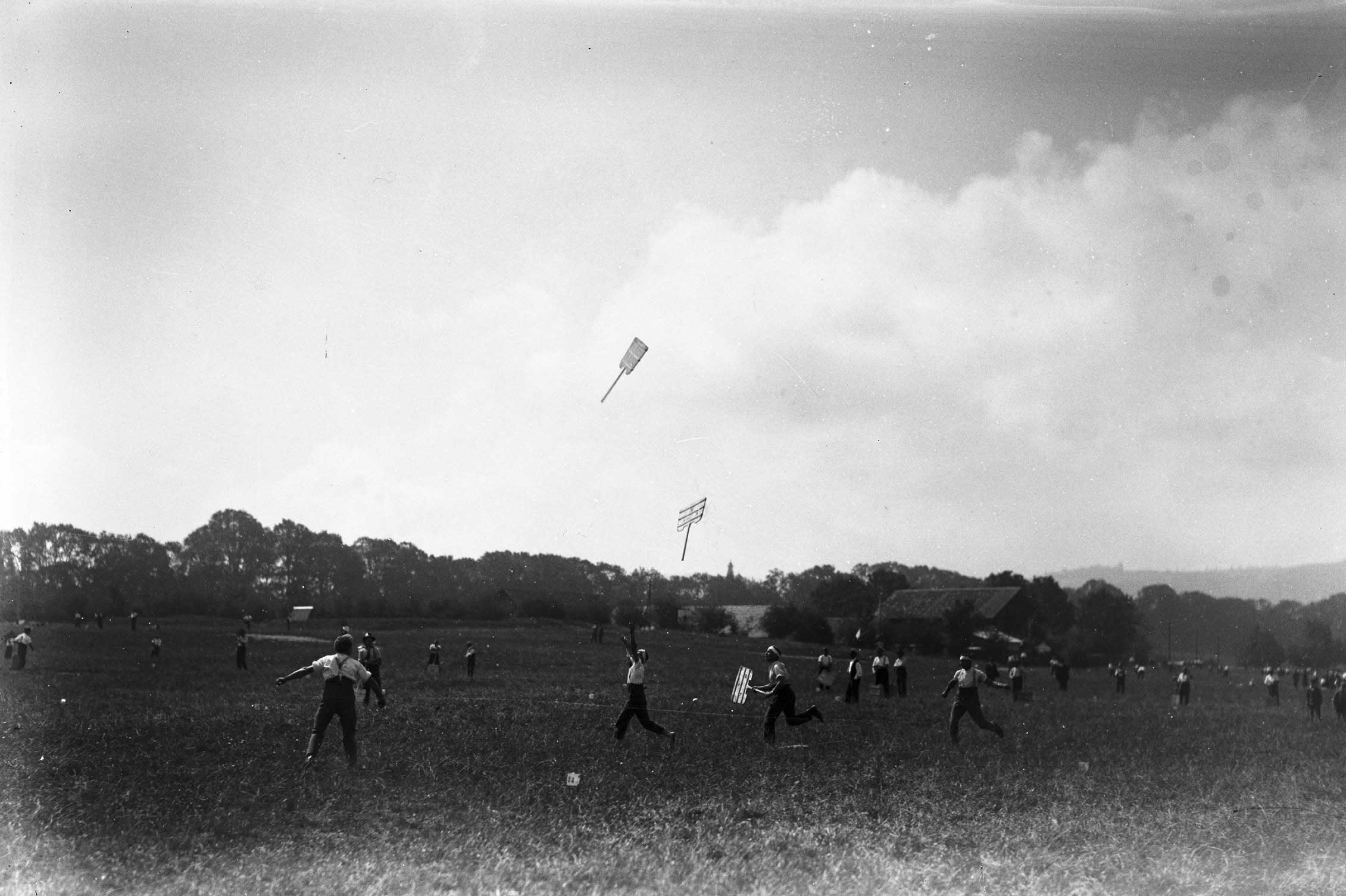 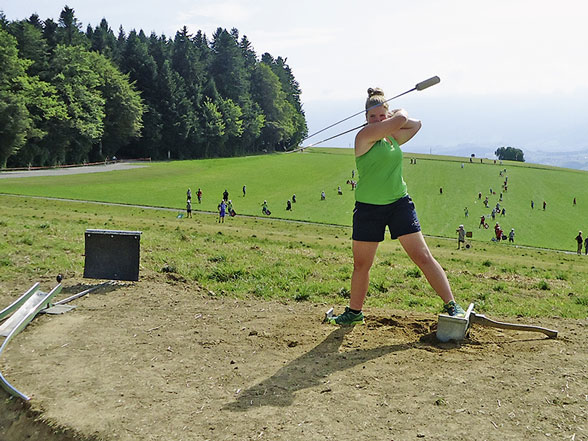 Hornussen is one of the three traditional national Swiss sports. In today's setup, the "batsman" hits the puck, or "Nouss", with an elastic stick from the starting block towards the opponents' field. There, the defending team try to intercept the Nouss as early as possible before it hits the ground.

To do this they use "Schindel", shovel-like boards held high or thrown into the air to meet the Nouss. The current form of the game probably originated in Emmental (where it was first mentioned in 1625). Jeremias Gotthelf described Hornussen and its significance in rural life in detail in "Uli der Knecht". In 1902 the Federal Hornussen Association was founded in Burgdorf, attracting 24 clubs and around 600 players in the first year alone. The combination of sport and custom has secured the ongoing success of Hornussen, and today the association has 171 clubs on its register (as of 2011). Traditionally the sport was exclusively practised by men, but women and girls have taken part over the last few years as well and are now integrated into the teams as equals.

Hornussen is primarily played in the Swiss plateau cantons of Bern, Solothurn and Aargau, but similar sports used to be played across the entire alpine area. Until 1945, "Gilihüsine" was played in Betten (in the canton of Valais), and "Hürna" remains a popular sport in Furna (in the canton of Graubünden).