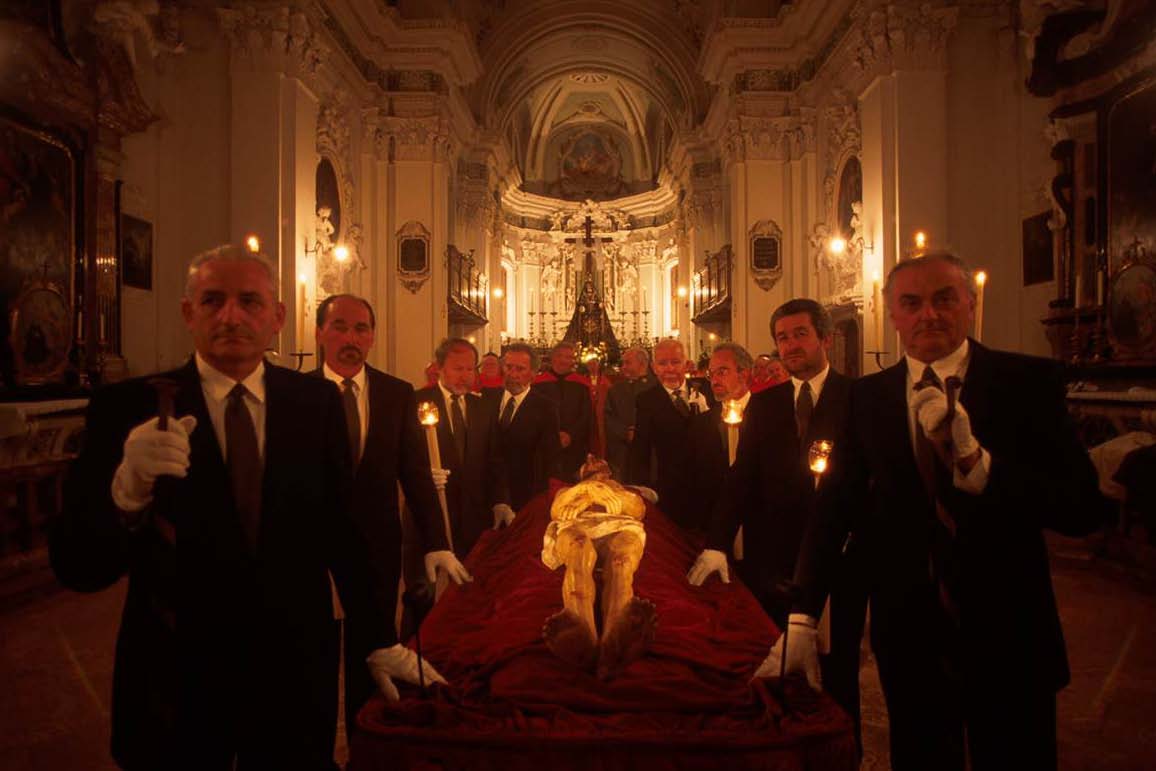 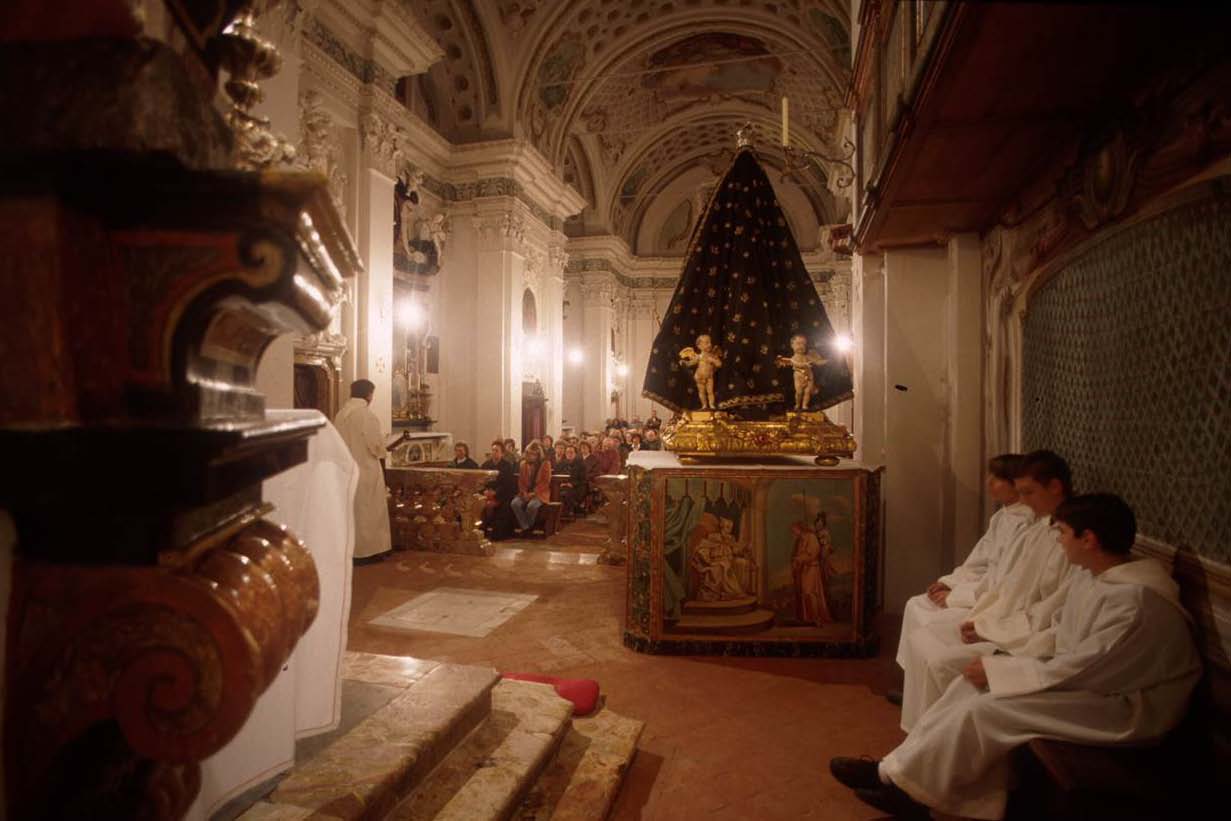 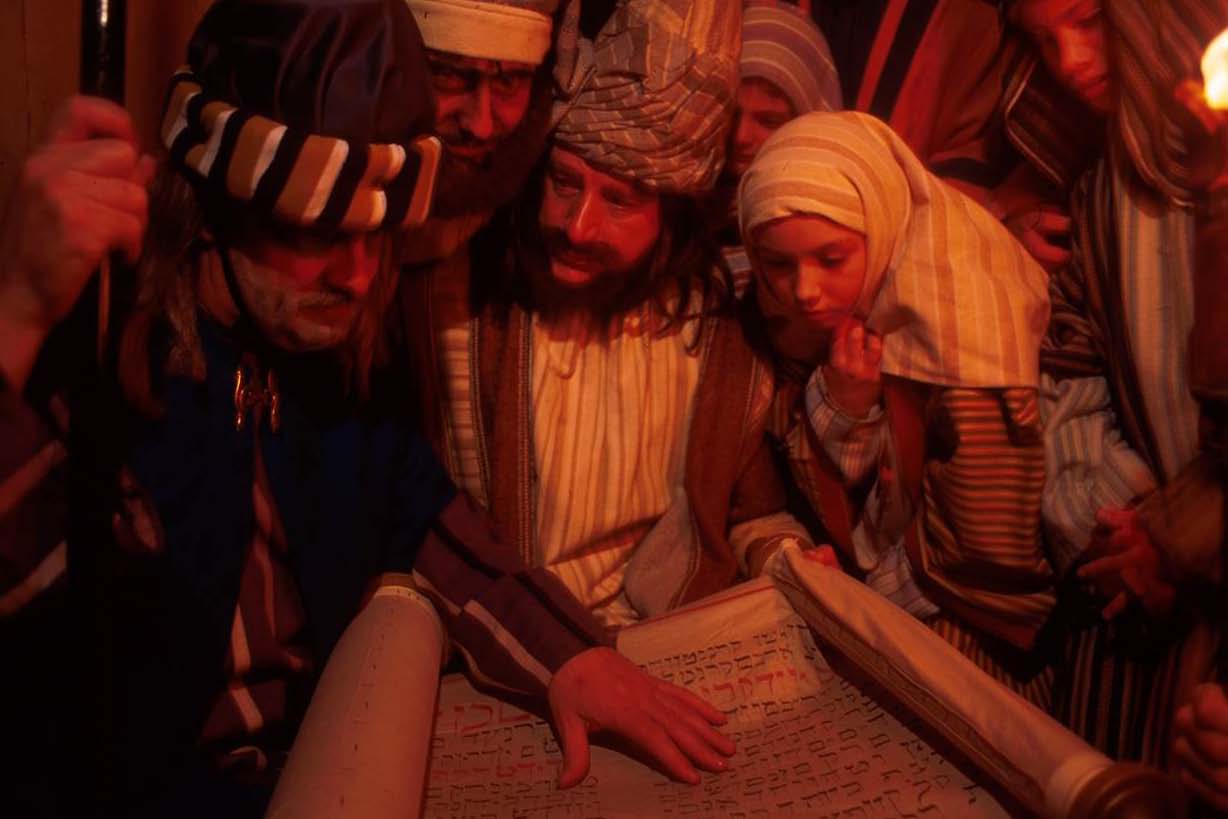 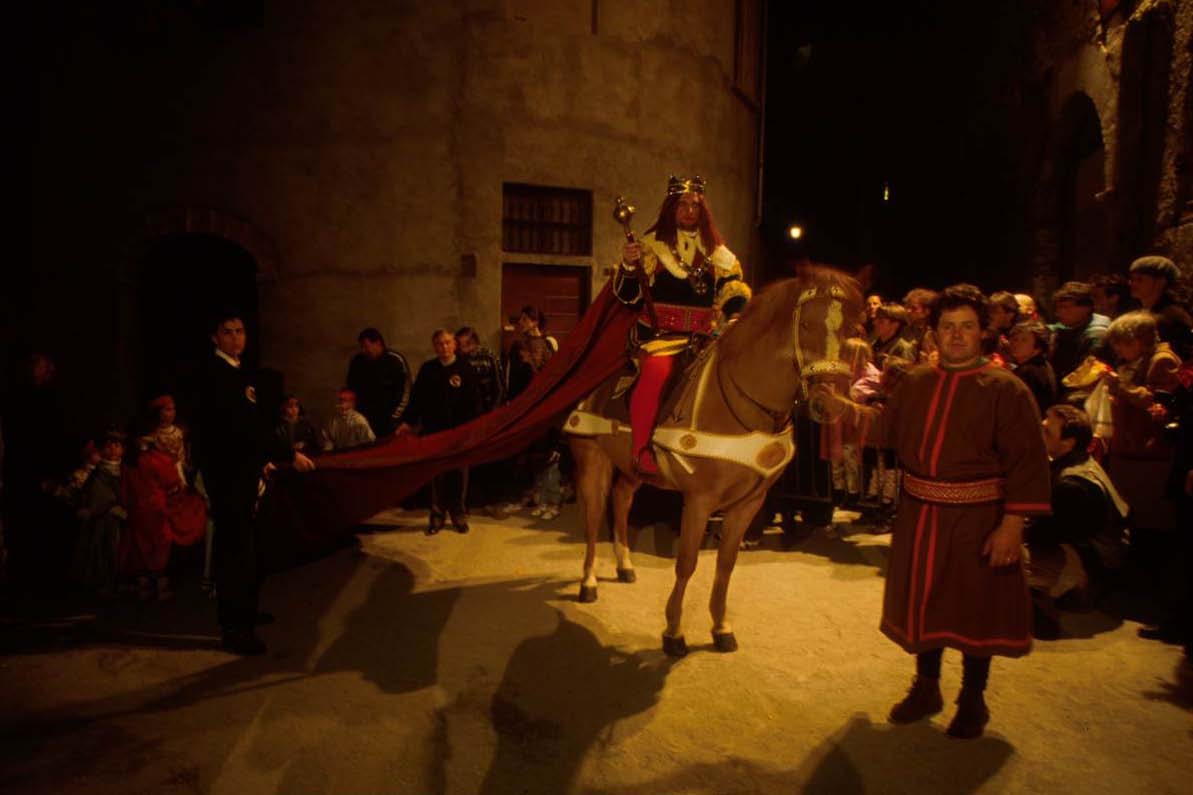 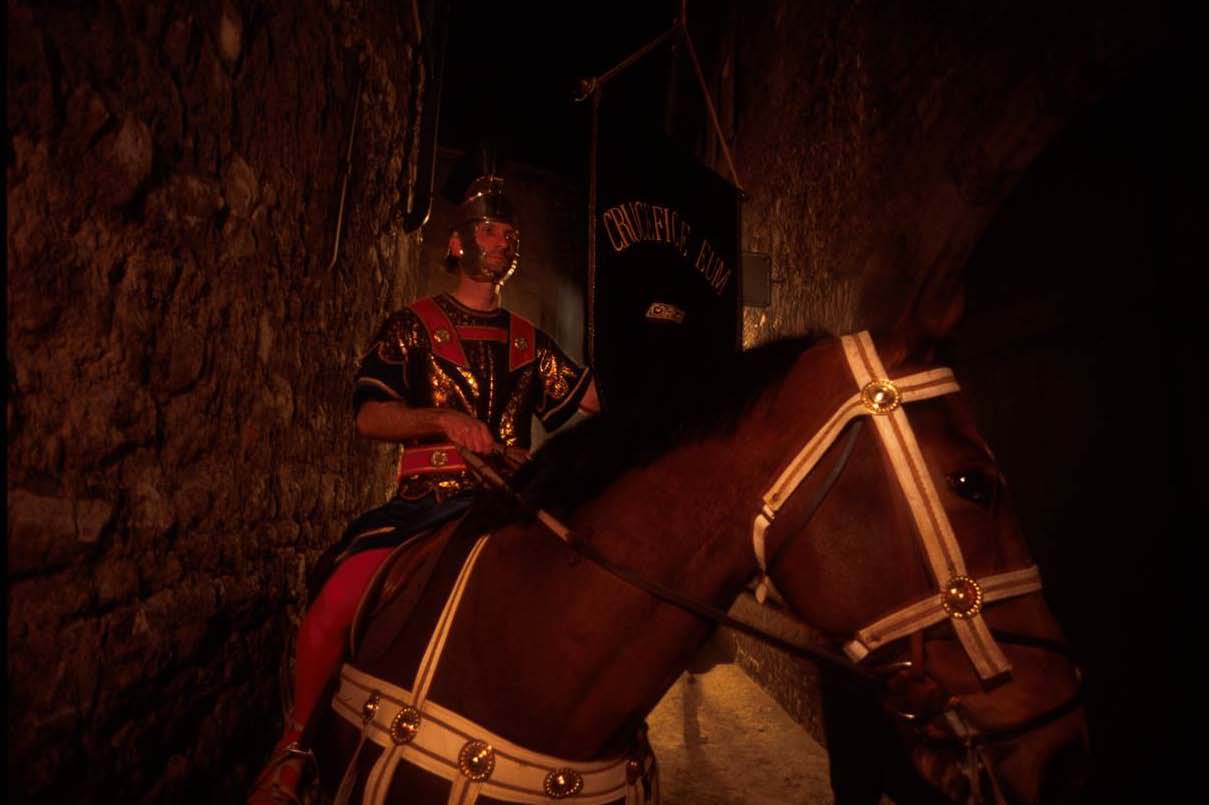 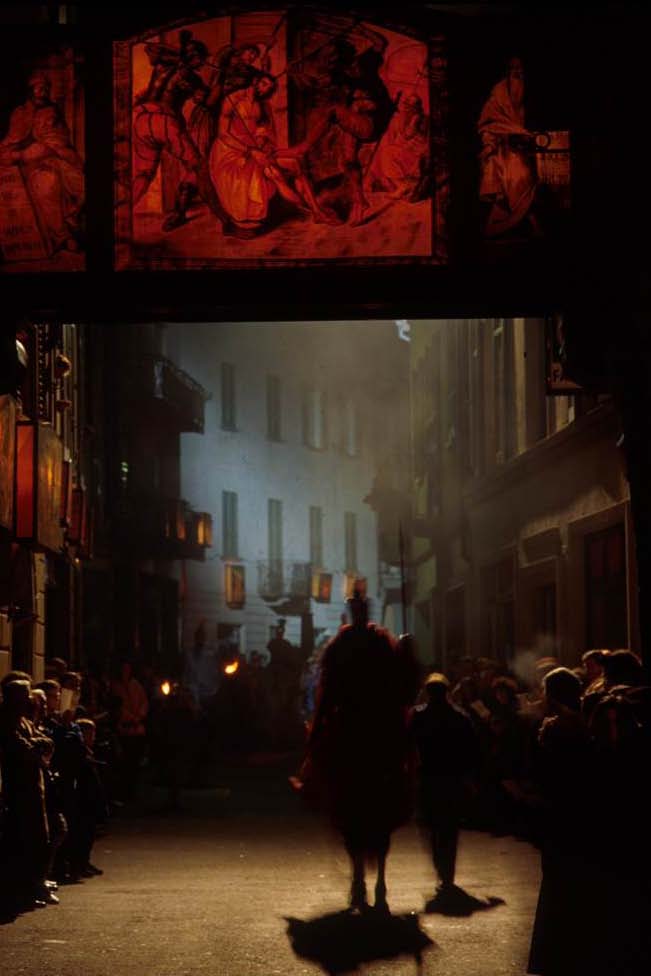 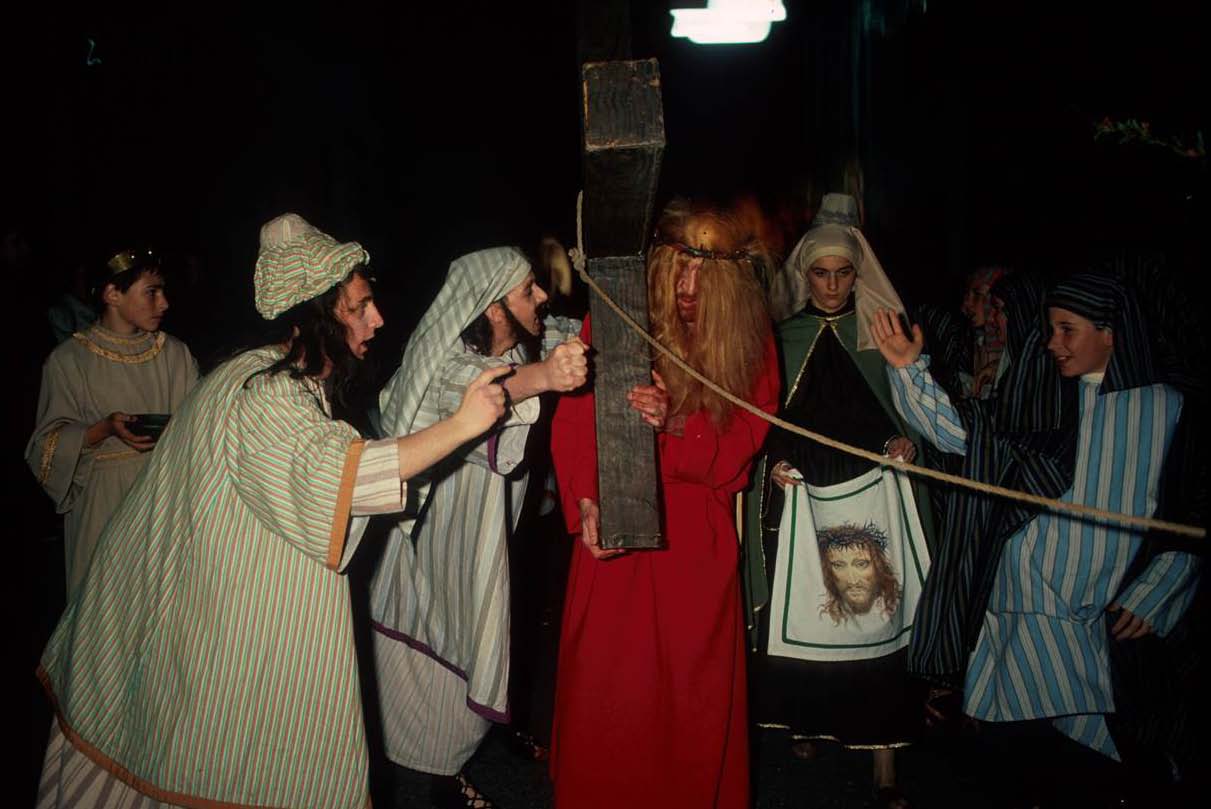 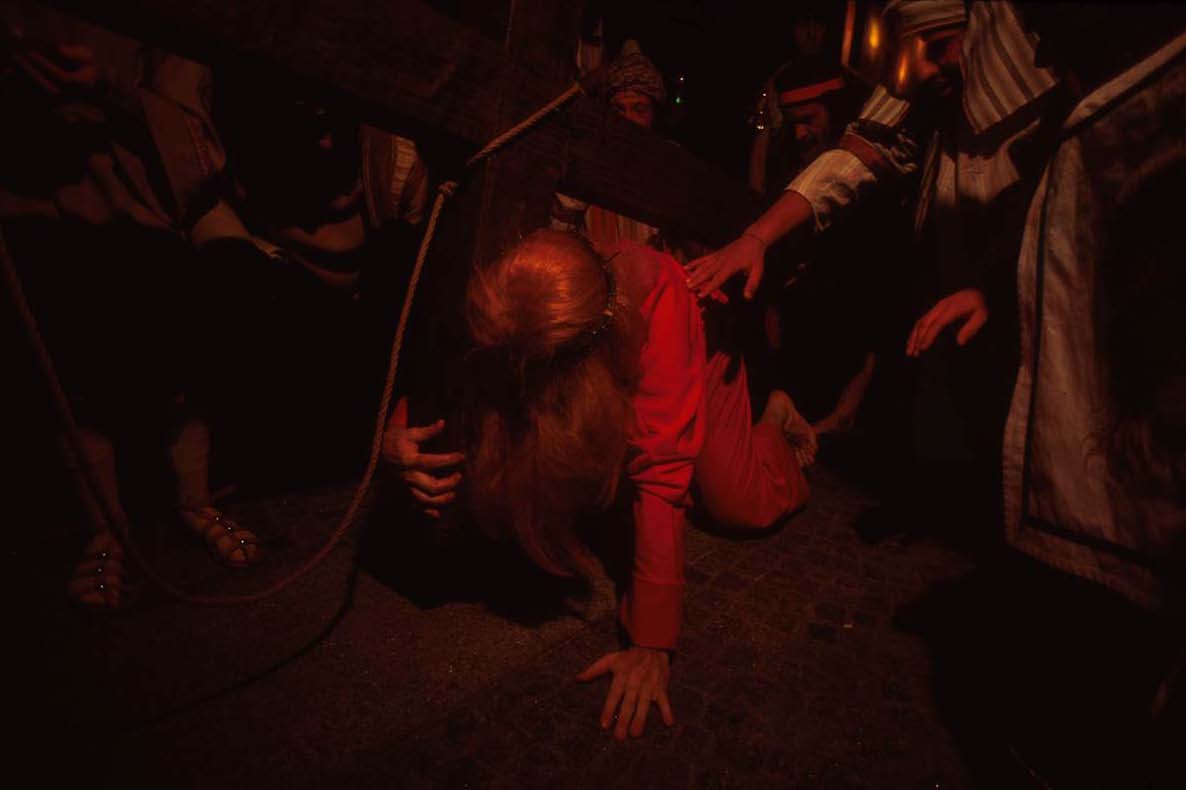 Maundy Thursday: Jesus collapses under the weight of the cross © Adriano Heitmann 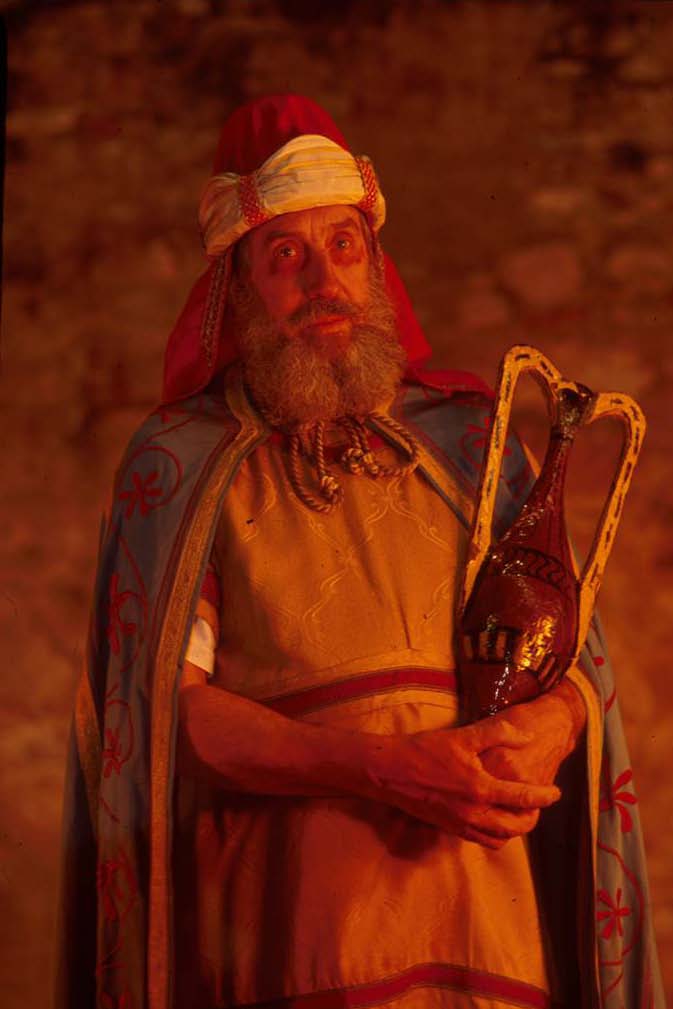 Maundy Thursday: Joseph of Arimathea, a member of the High Council, who allowed Jesus to be buried in his tomb © Adriano Heitmann 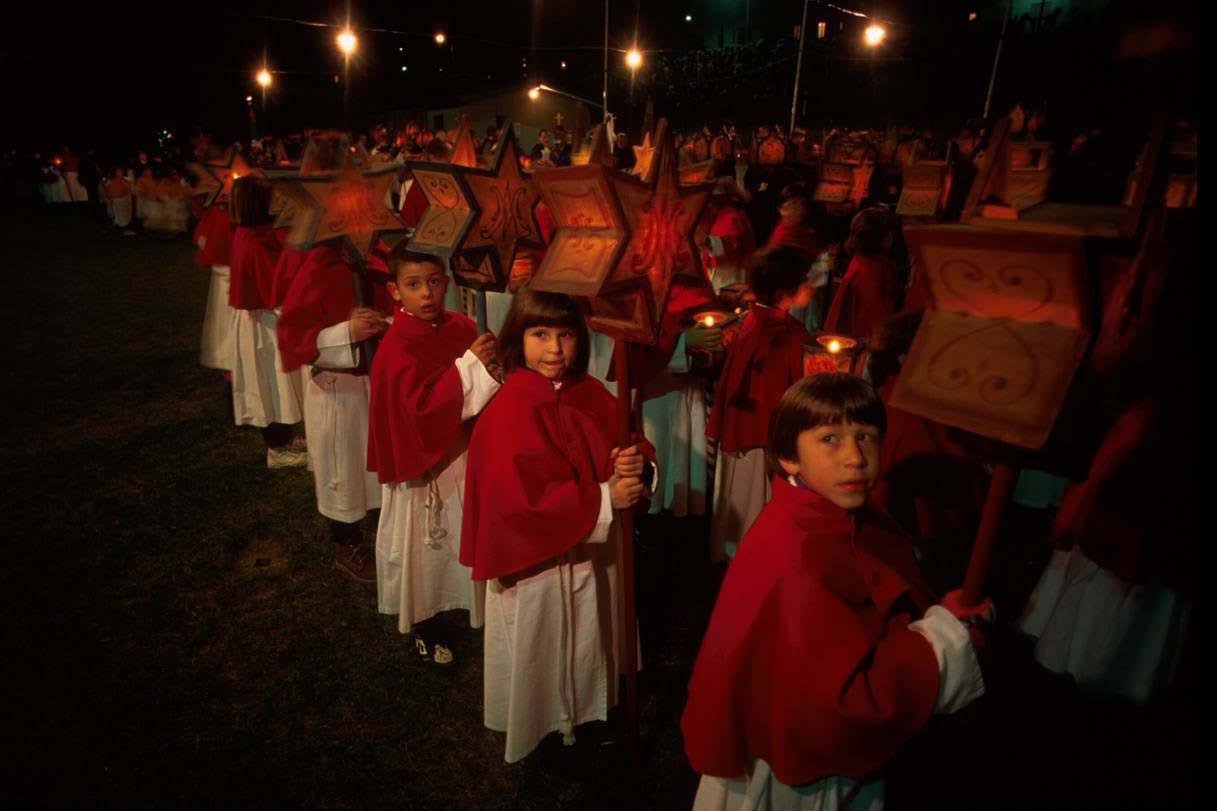 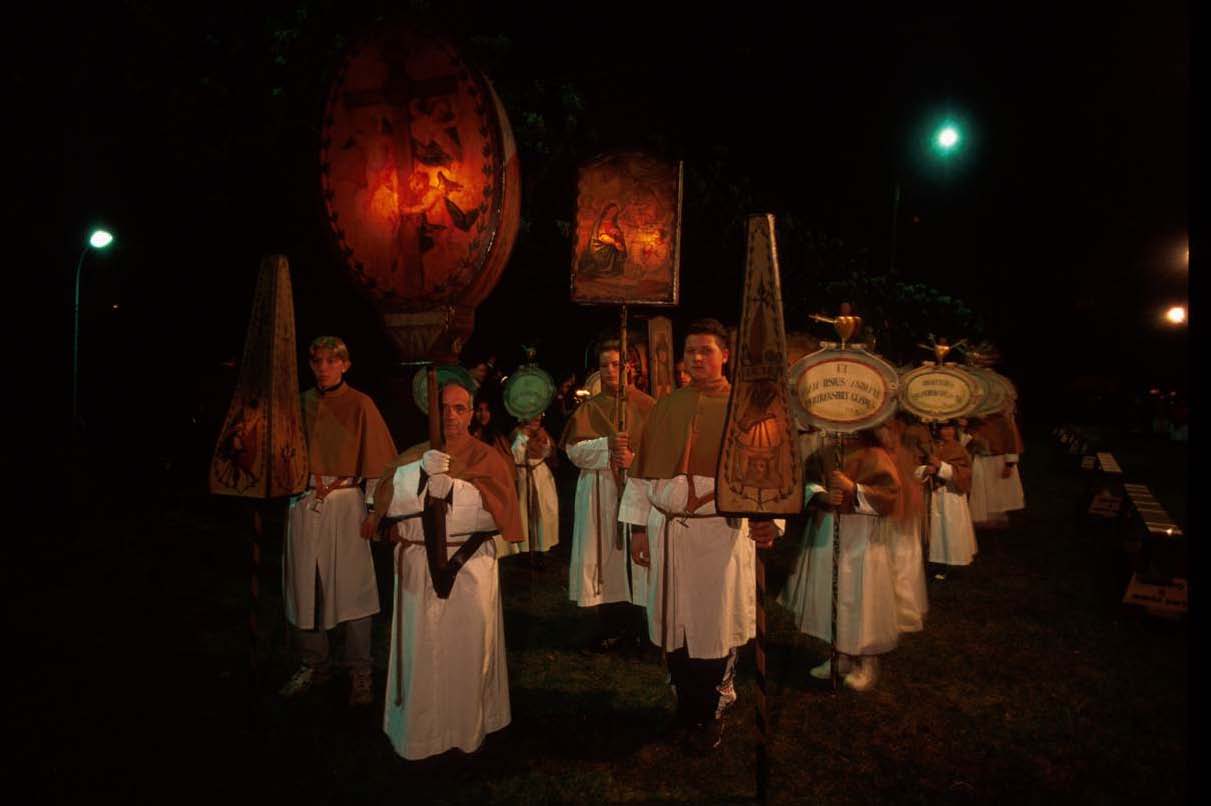 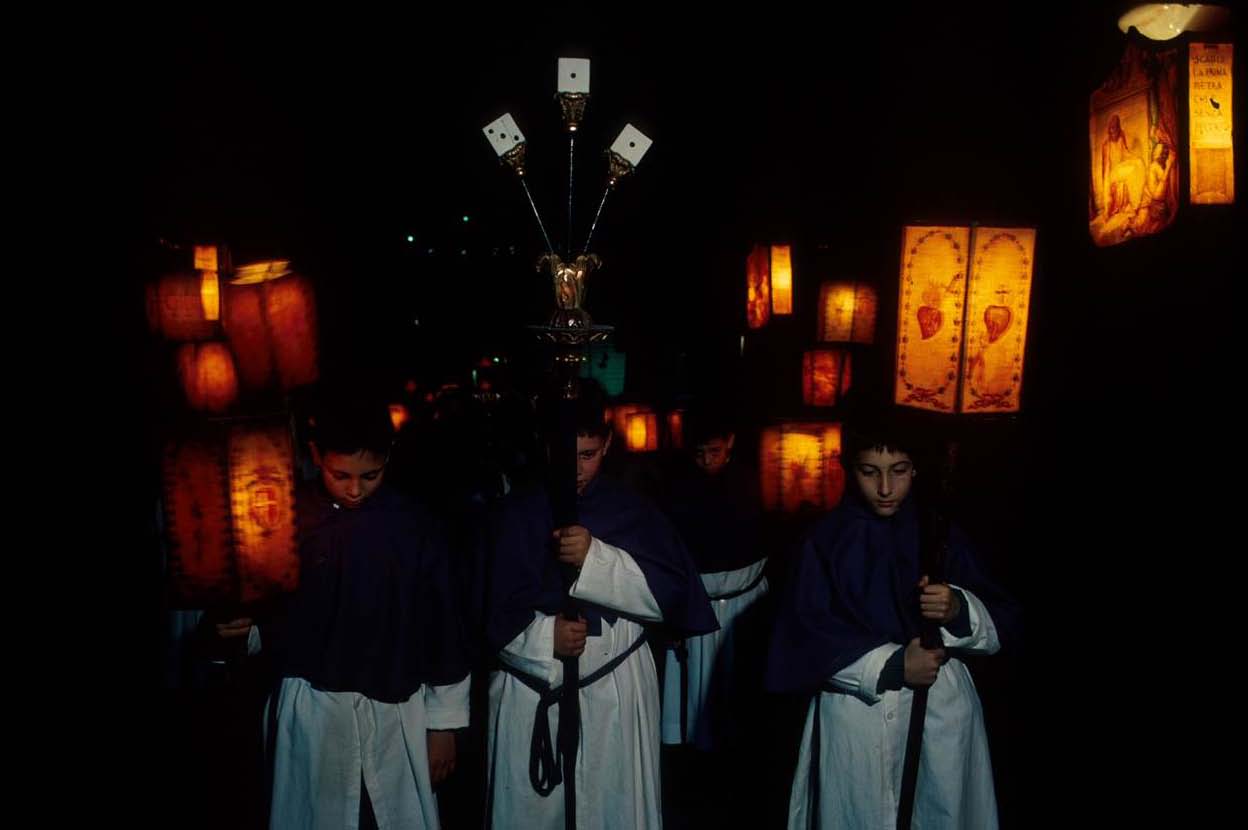 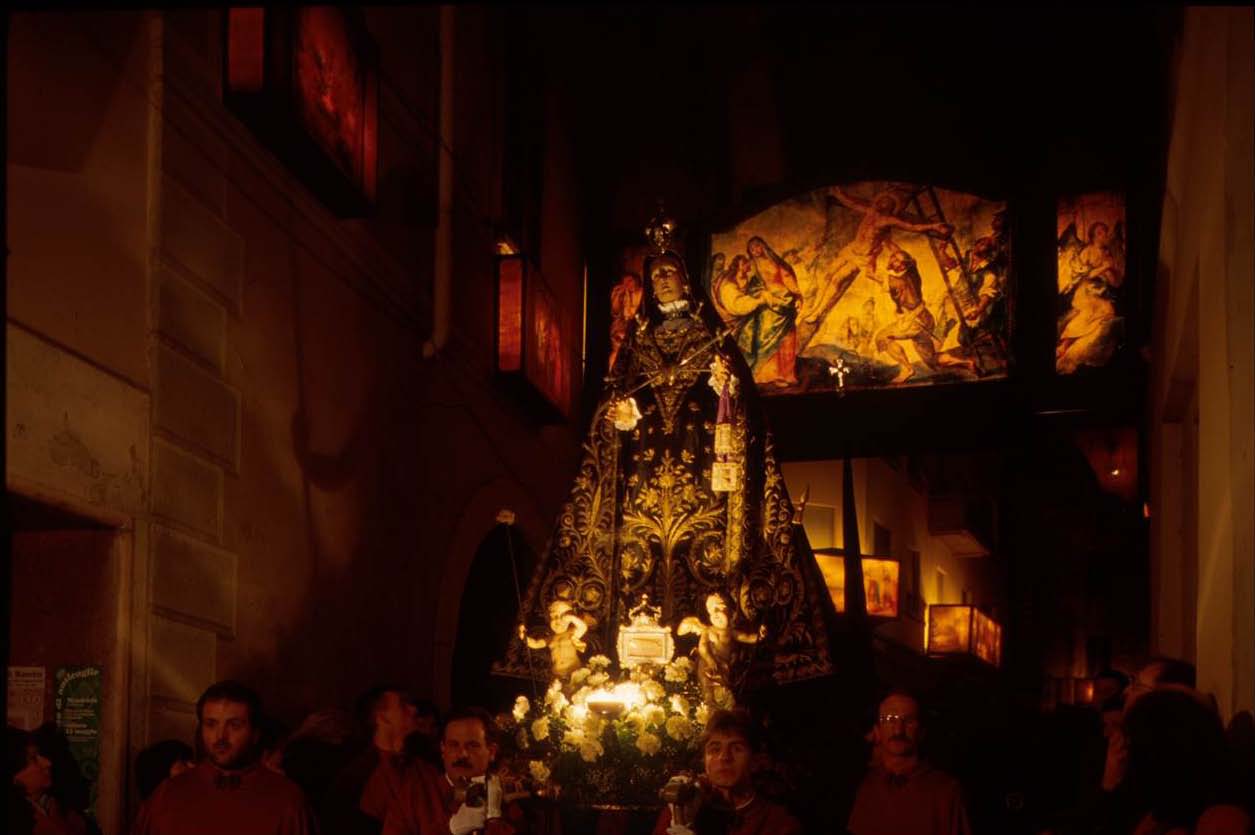 Good Friday: statue of Our Lady of Sorrows with a triptych, a large and illuminated picture, hanging above the procession route in the background © Adriano Heitmann 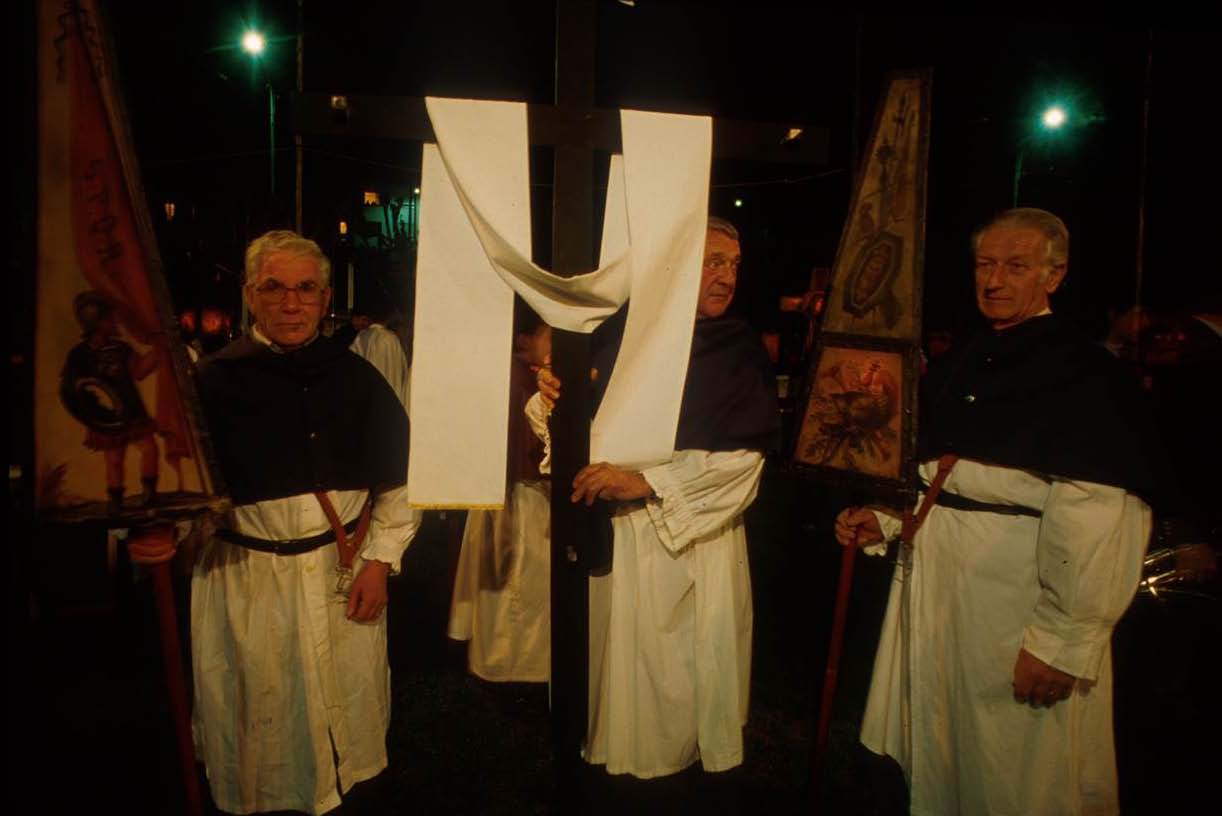 Good Friday: members of the Brotherhood with objects and transparenti relating to the story of the Passion © Adriano Heitmann

The Holy Week processions, which are documented as far back as the second half of the 17th century, make their way through the old town of Mendrisio on the evenings of Maundy Thursday and Good Friday. The street lights are turned off specially so that the lanes can be bathed in the soft light given off by vast, illuminated pictures called "transparenti" dipinti traslucidi in tela montata su “casse” illuminate dall’interno, di forme e dimensioni diverse, che sovrastano il percorso della processione that hang above the entire route and depict scenes from the Gospels and the Old Testament. On the evening of Maundy Thursday, dozens of amateur players act out the Passion of Christ in a series of scenes based on the Gospels. Their performances feature horsemen, Roman soldiers and biblical figures in lavish costumes. La sfilata è caratterizzata dalla mancanza di dialoghi tra i personaggi, i quali si limitano a esprimersi tramite gesti e atteggiamenti silenziosi.

The simple and formal Good Friday procession is imbued with a more pronounced spirituality. More than 600 members of the various brotherhoods and church associations take part, marching through the streets with statues of the dead Christ and the grieving Virgin Mary, before which onlookers bow down. The procession is accompanied by three companies of musicians playing solemn funeral marches, with herald drummers on horseback leading the way and bringing up the rear. The Holy Week processions are preceded by the "Settenario", a church ceremony dedicated to the Seven Sorrows of Mary.