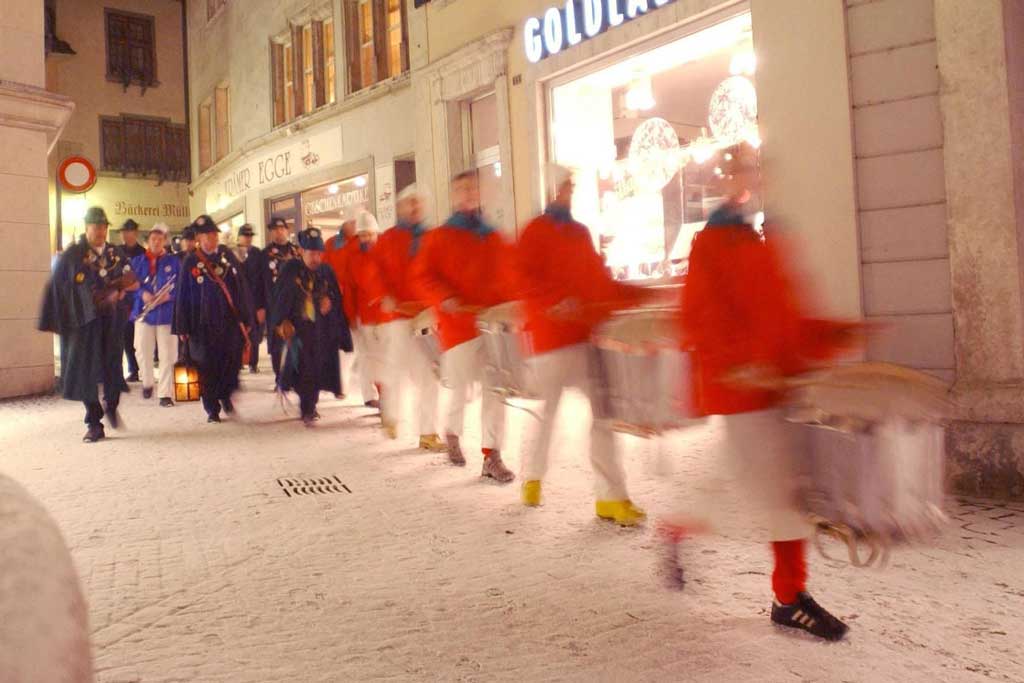 Narrenzunft Honolulu during the Hilari procession, playing drums and the Hilari music which has been in existence since at least 1881 © Oliver Menge, 2003 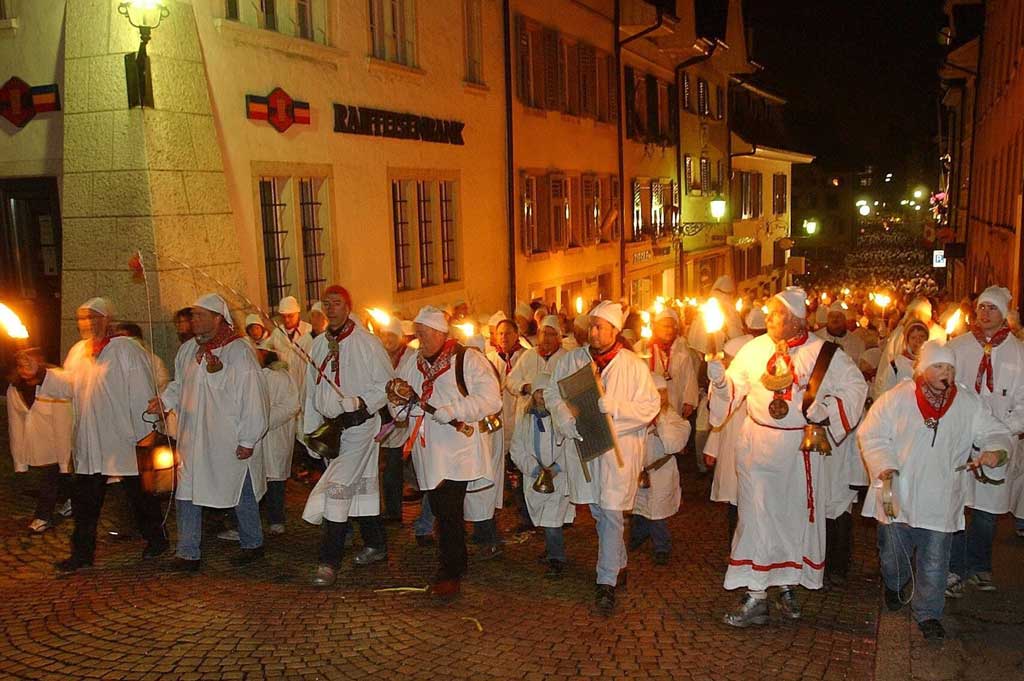 'Chesslete' in the Solothurn old town in the early morning hours of Schmutziger Donnerstag © Oliver Menge, 2006 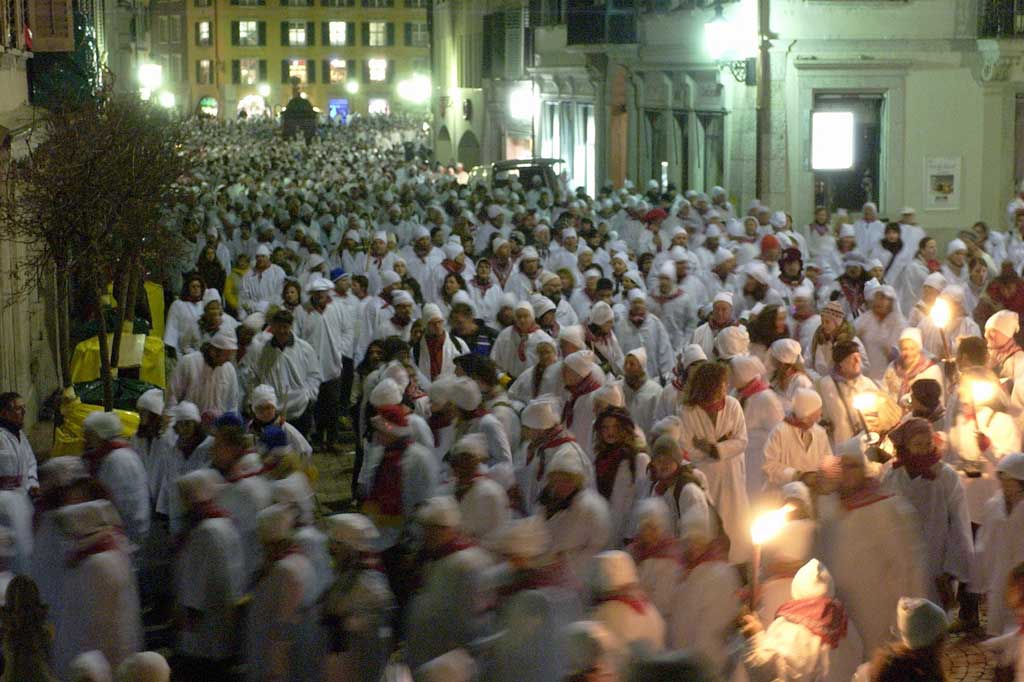 Around 6,000 Chesslete participants driving out the winter in white nightshirts © Oliver Menge, 2004 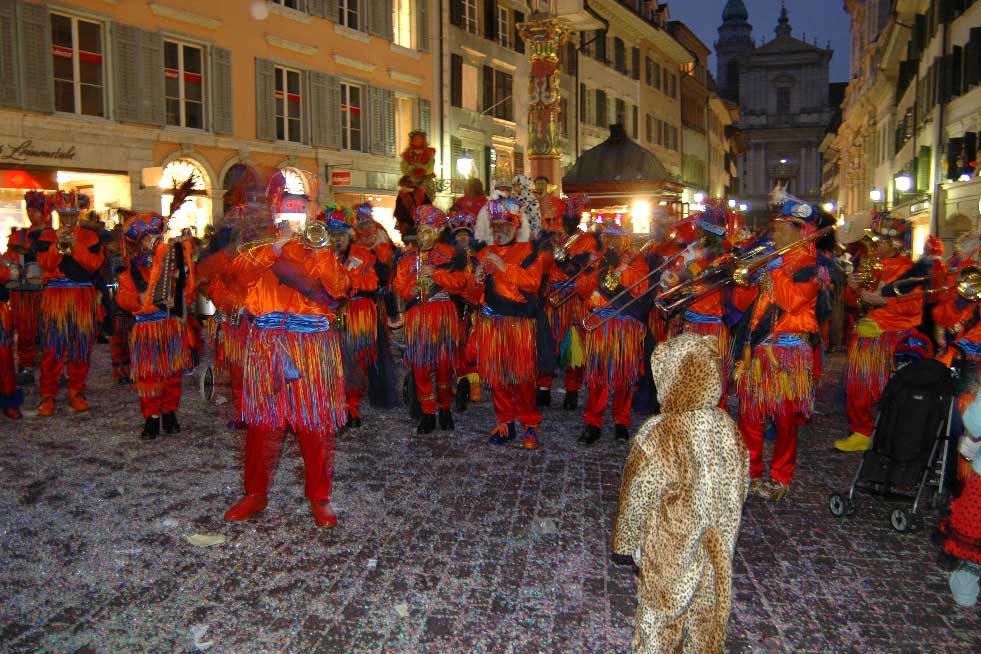 The carnival takes to the streets and pubs of Solothurn – brass bands perform the pieces they have practised © André Kilchenmann, 2010 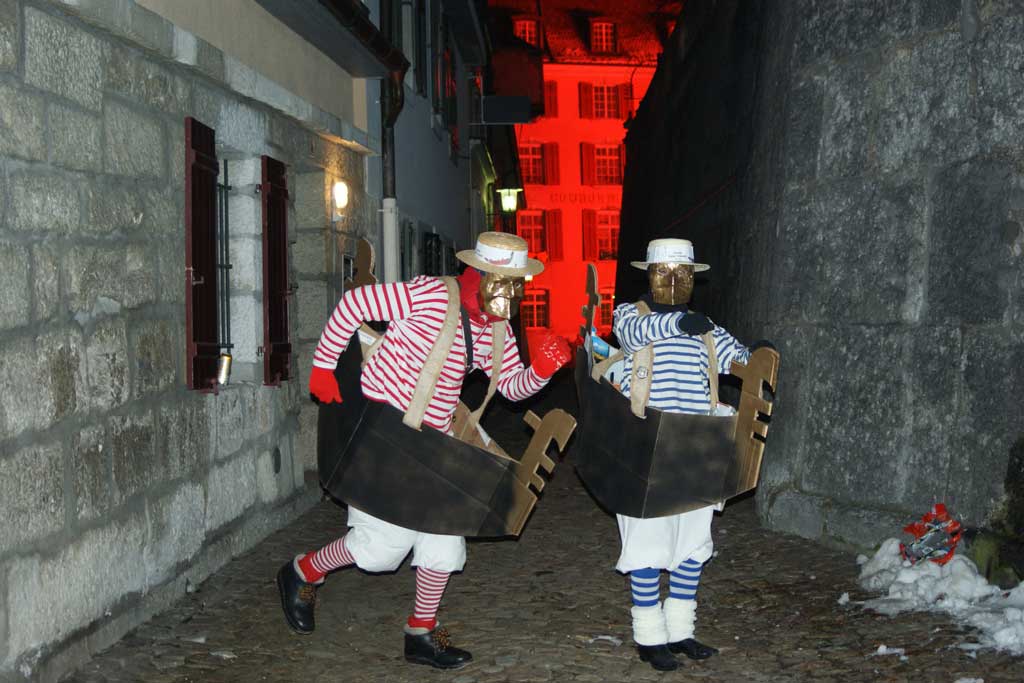 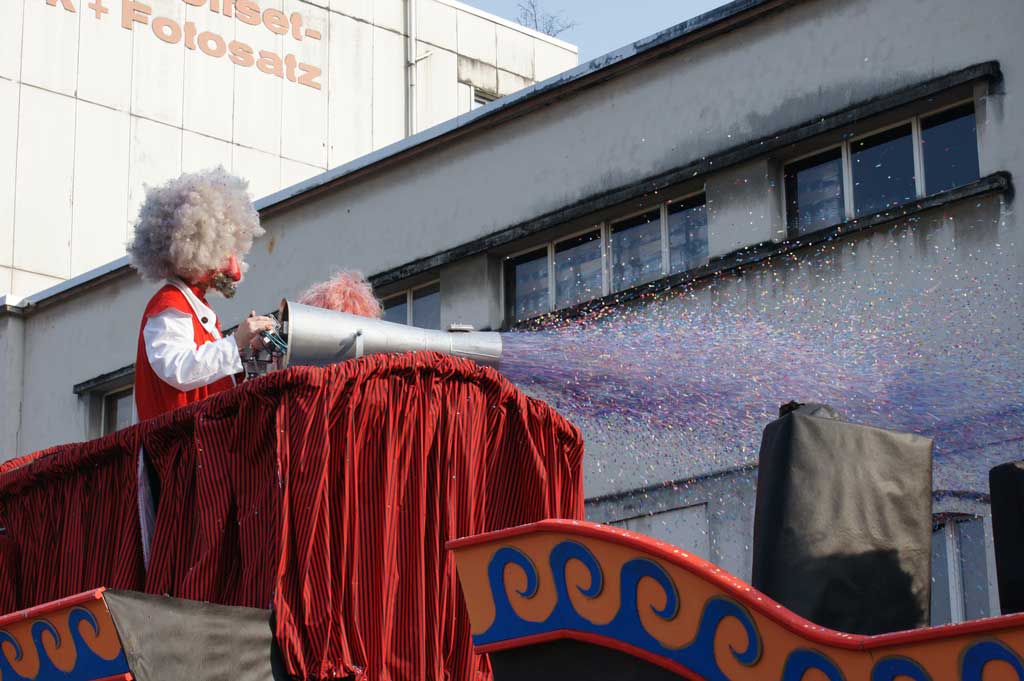 No Solothurn Fasnacht procession would be complete without a confetti cannon © André Kilchenmann, 2011 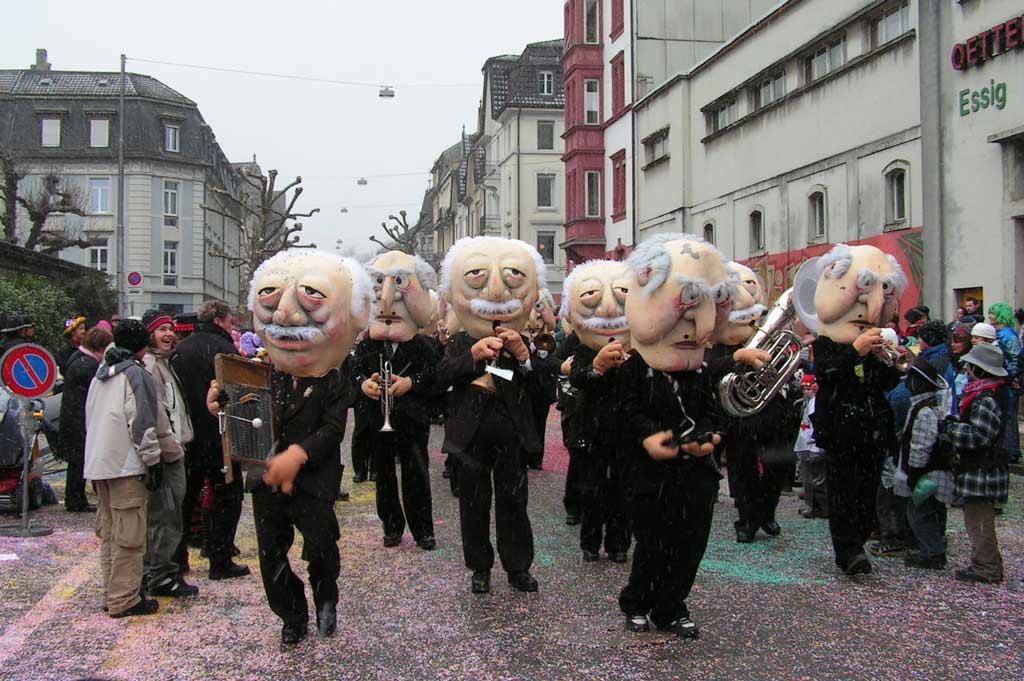 The city of Solothurn boasts some twenty brass bands, all of which have been established since the 1970s © André Kilchenmann, 2006 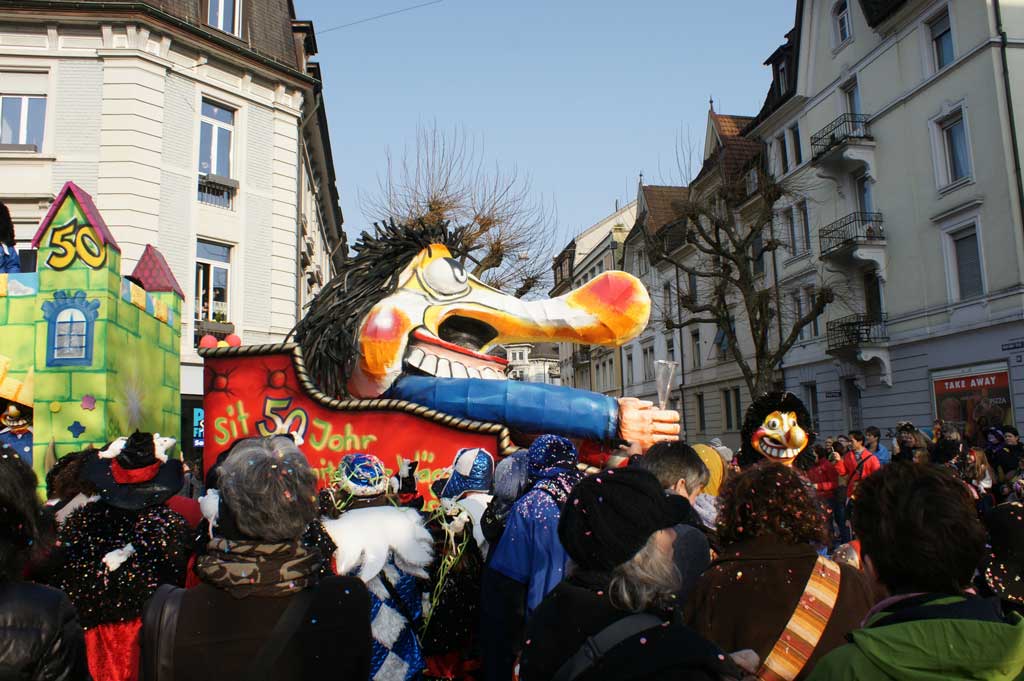 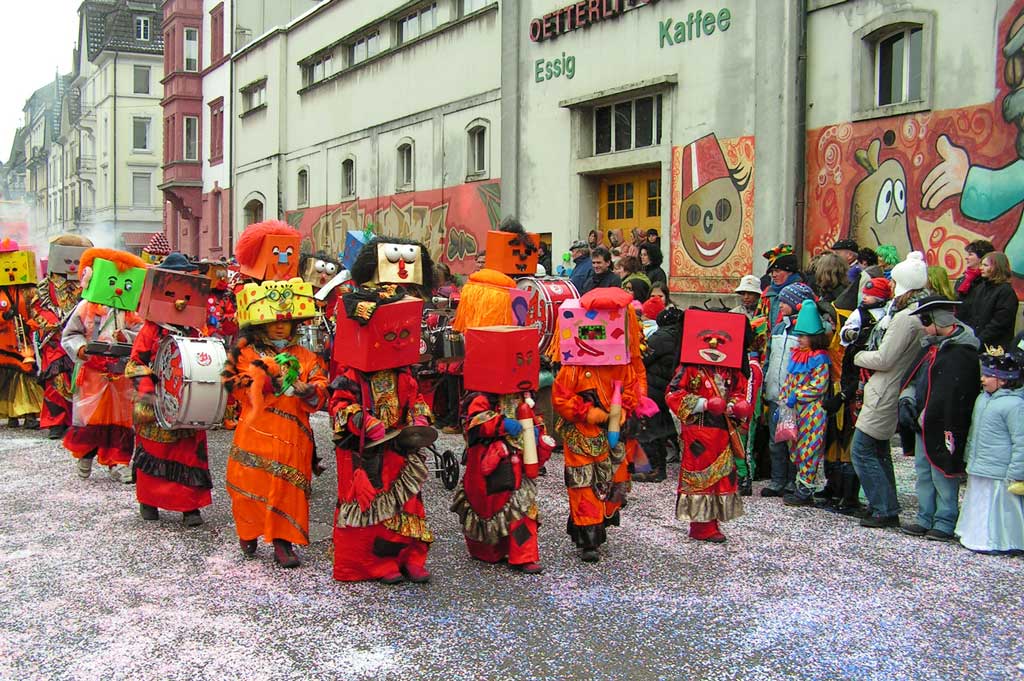 The 11i-Schränzer group is the only children's brass band in the city of Solothurn © André Kilchenmann, 2006 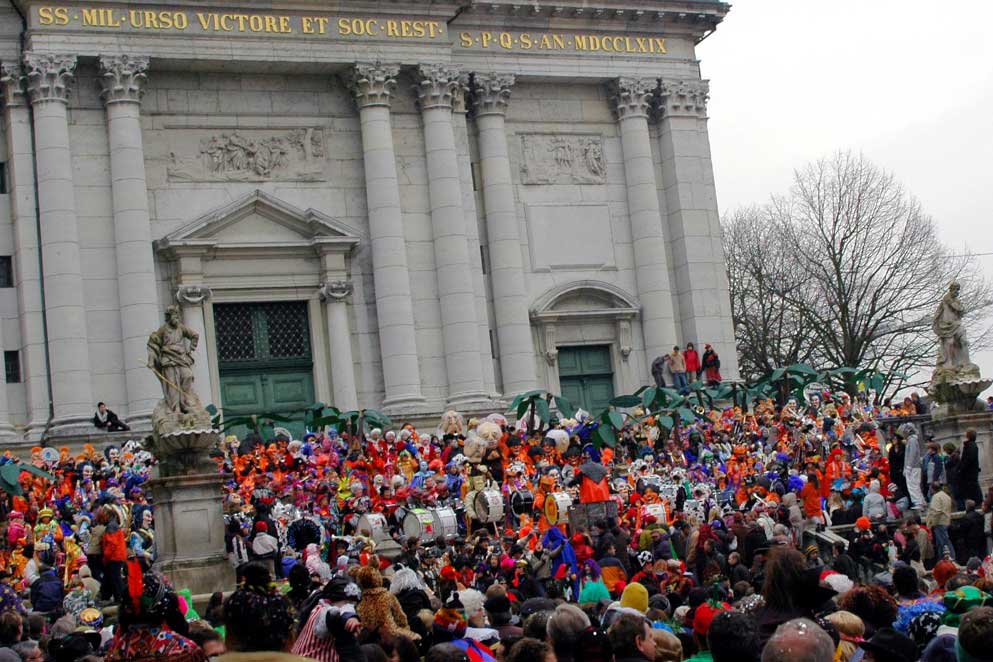 The music of the 'Monster-Guggerete' brass band has been enjoyed by young and old since 1970 © André Kilchenmann, 2006 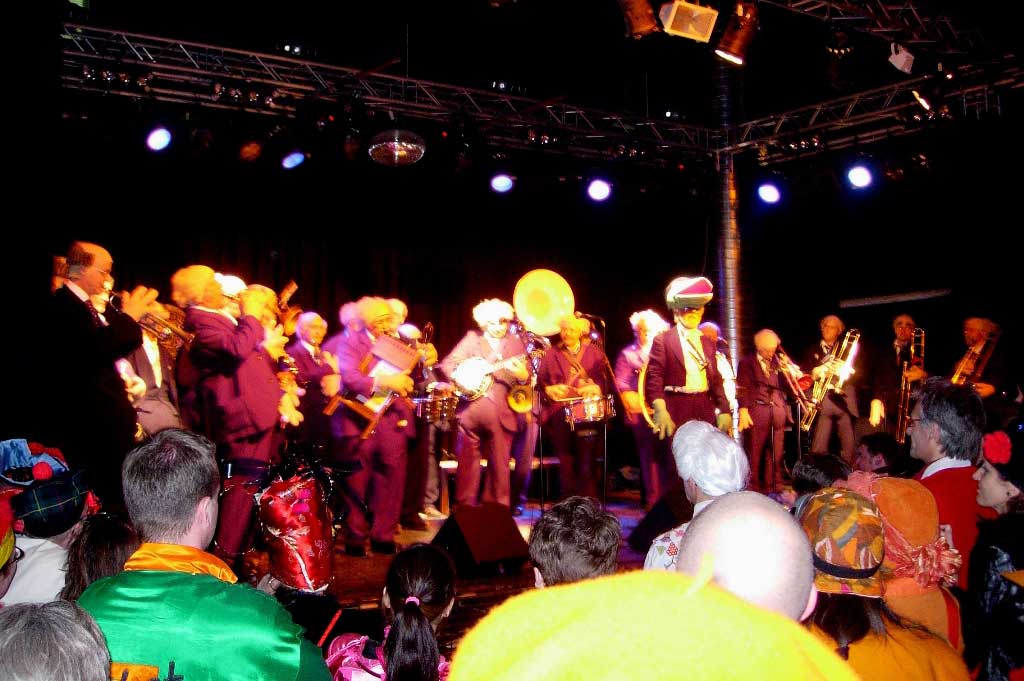 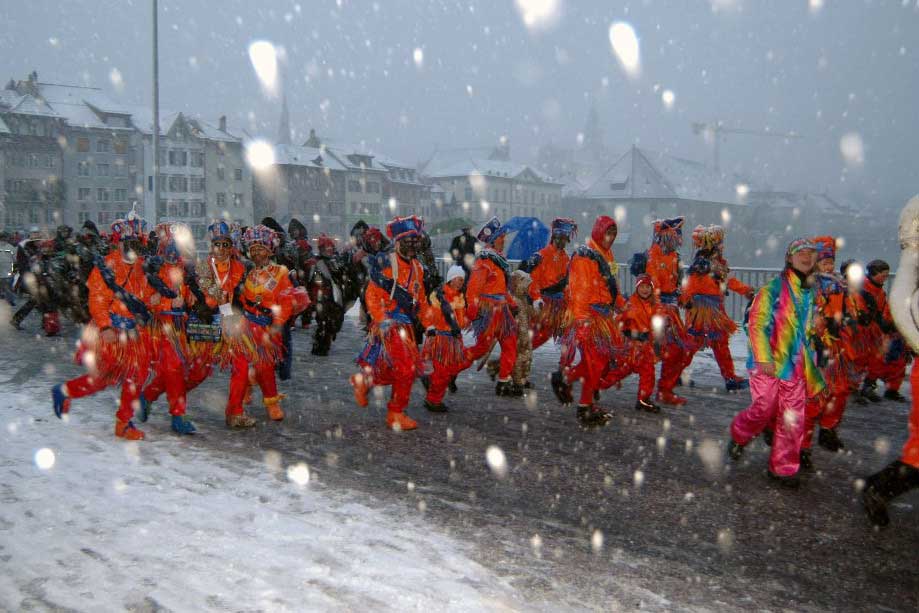 On Tuesday evening the fool's guilds meet for the Zapfenstreich, a kind of musical procession during which they chant 'I ma nümm' (I've had enough) © Peter Pulfer, 2006 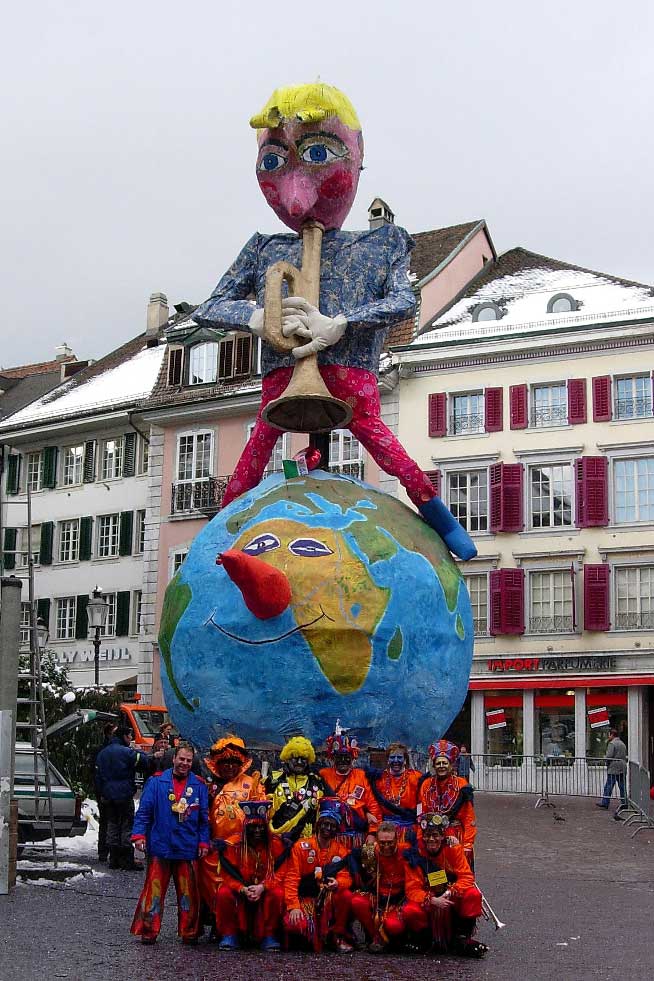 The Ambassadonner brass band in front of the Böög effigy, whose gender alternates each year © André Kilchenmann, 2006 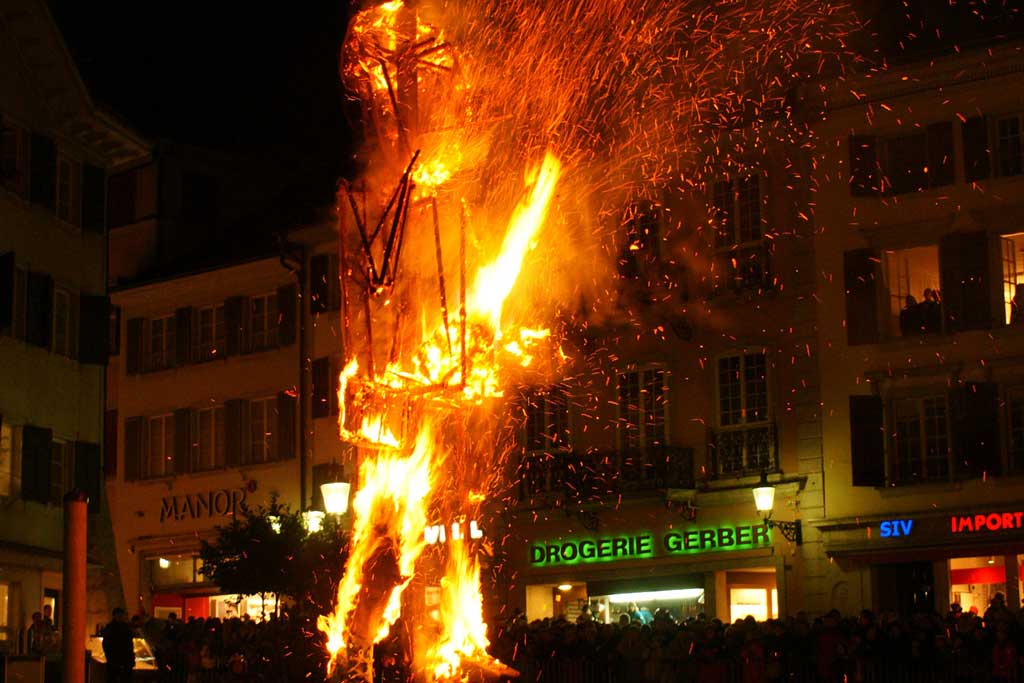 Fasnacht ends on Ash Wednesday with the burning of the Böögg © André Kilchenmann, 2009

The Solothurn Fasnacht begins on 13 January, the name day of Saint Hilarius. The Latin word 'hilaris', meaning cheerful or lively, gives an indication of the joyful celebrations that then follow. 'Hilari' day has marked the beginning of the Fasnacht celebrations since the 17th century, and since 1853 the honour of heralding in Fasnacht on Hilari day has gone to the 'Narrenzunft Honolulu' (Honolulu fool's guild) with their carnival general assembly and subsequent Hilari procession. The head of 'Narrenzunft Honolulu' replaces the mayor, the Rathausgasse's former name of 'Eselsgasse' (donkey lane) is reinstated and Solothurn calls itself Honolulu until Ash Wednesday.

The actual carnival week begins with the 'Chesslete' on the Thursday before Ash Wednesday, which is dubbed 'Schmutziger Donnerstag' (Dirty Thursday). Several thousand revellers take to the streets in white shirts, night caps and red scarves to rouse the people of Solothurn with a cacophony of loud percussive instruments, led by the 'Oberchessler', and usher in the 'fifth season', as the carnival celebrations are known. As in the rest of Switzerland, there are processions and balls, brass bands and 'Schnitzelbank' groups (a 'Schnitzelbank' is a collection of humorous songs or verses) perform on the streets and in pubs and restaurants, Fasnacht magazines are handed out and a 'Böögg' (effigy) is burnt. But 'Hilari' and 'Chesslete' are characteristic traditions of the Solothurn Fasnacht that have spread throughout the whole canton. They are even celebrated in the Solothurn municipalities to the north of the Jura mountains.