Schwägalp ascent: As soon as the path gets steep, the herdsmen take the large bells from the cows and carry them © Hans Hürlemann, Urnäsch, 2001 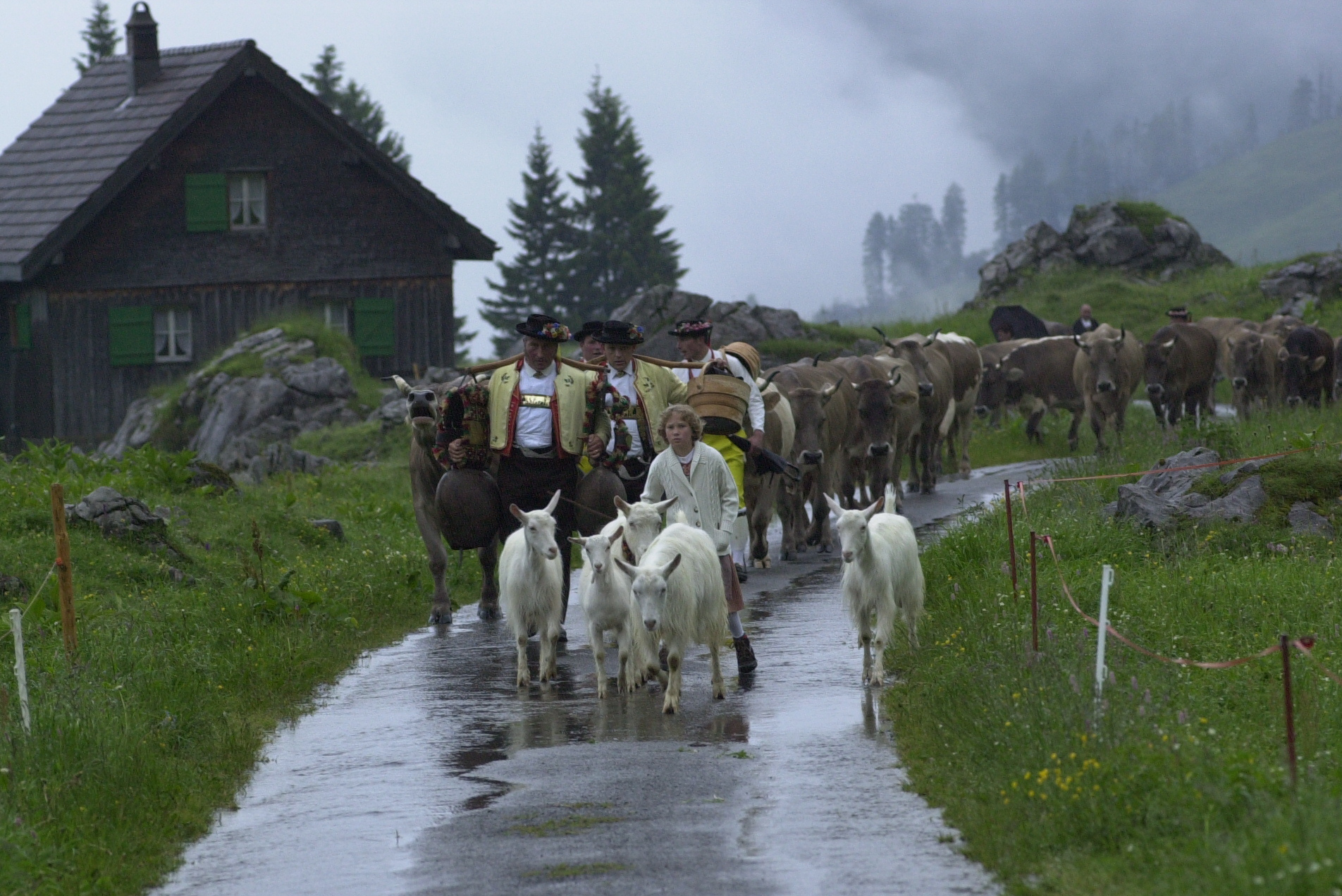 Schwägalp ascent: The procession goes on even if it rains © Hans Hürlemann, Urnäsch, 2001 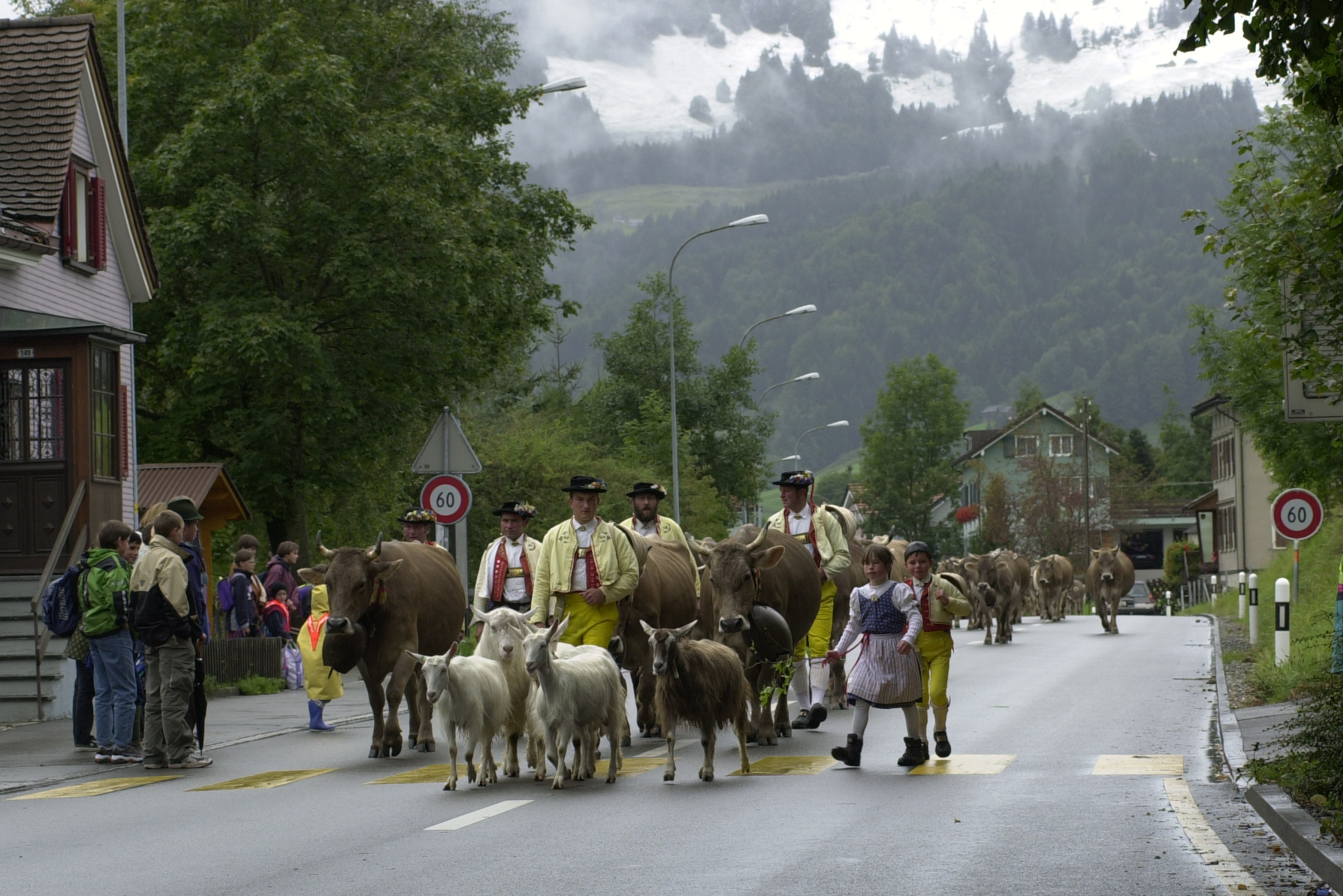 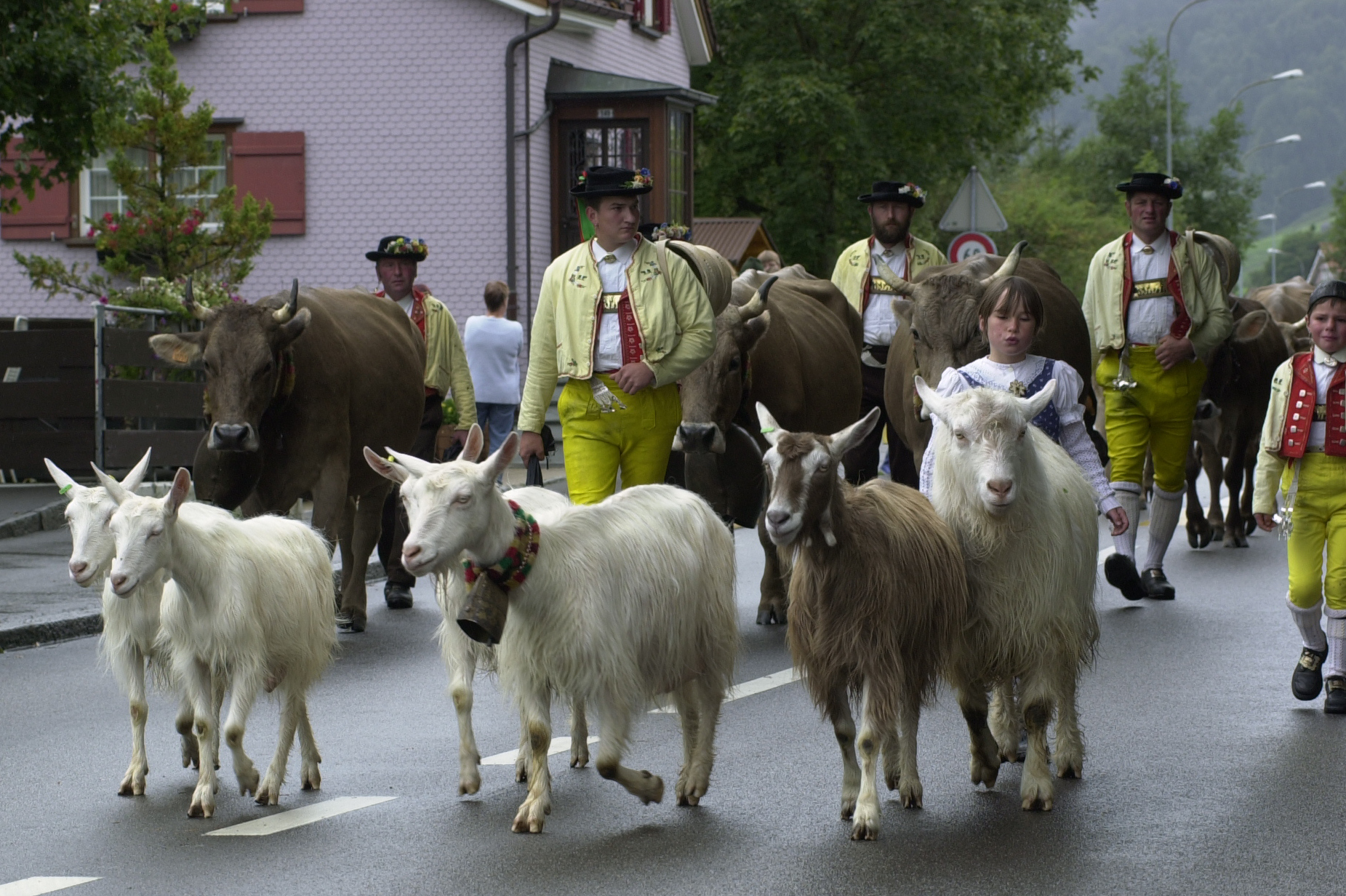 Descent, Urnäsch: Children and goats at the head of the procession © Hans Hürlemann, Urnäsch, 2001 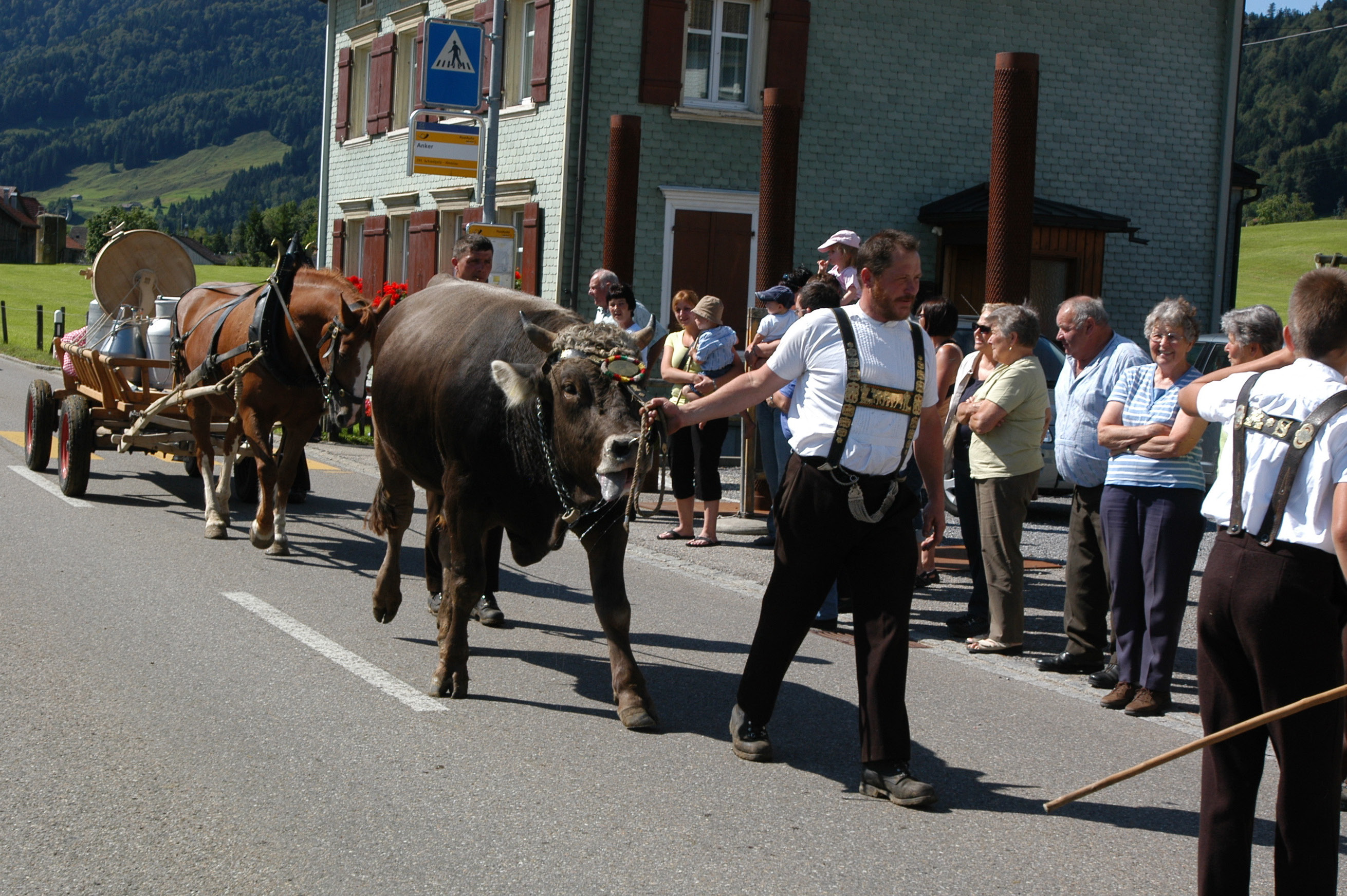 Descent, Urnäsch: A farmer leading a bull by its halter; behind him a cart full of tools for the daily work on the alpine pastures © Hans Hürlemann, Urnäsch, 2011 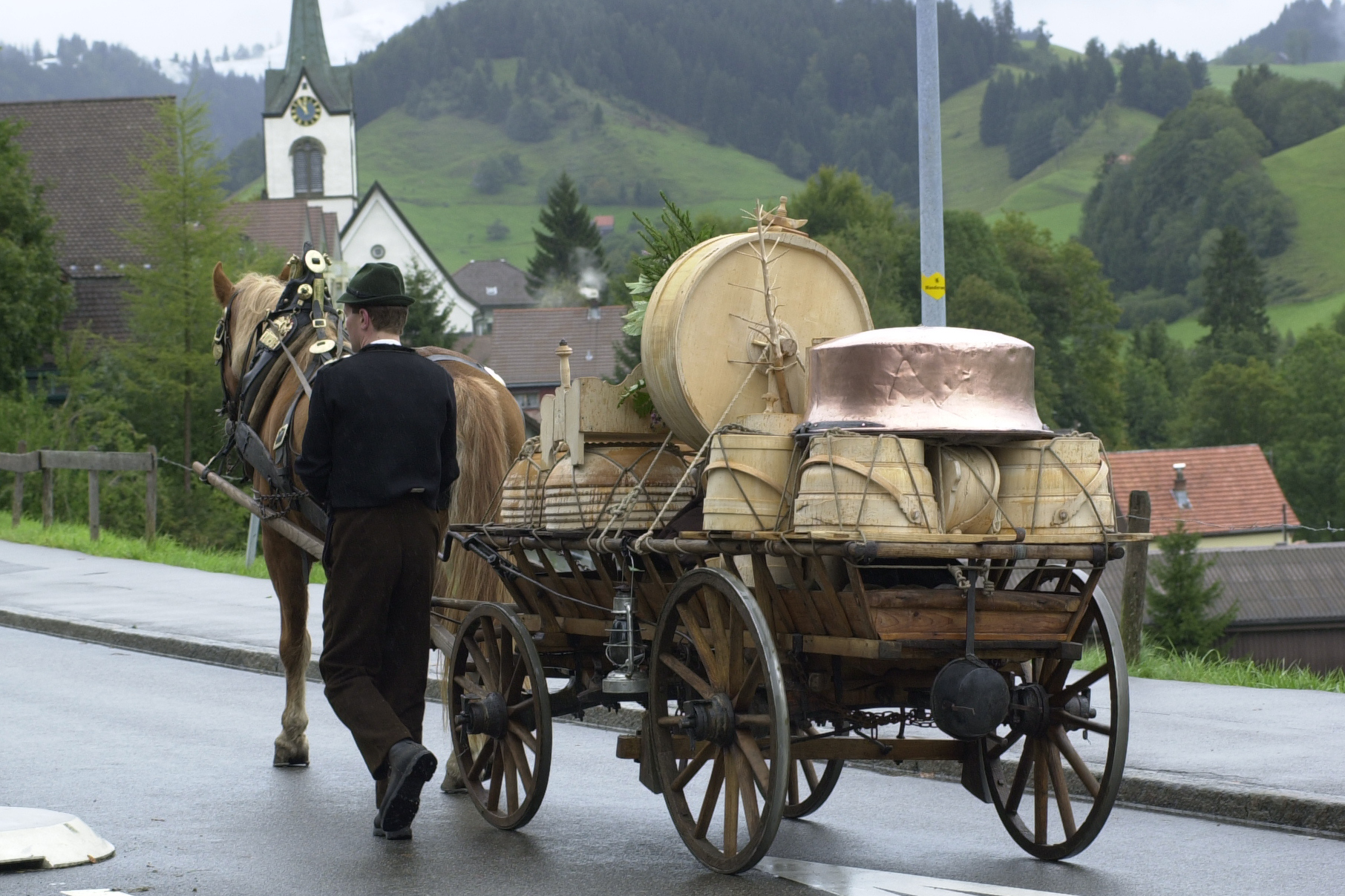 Descent, Scheidweg Urnäsch: To respect tradition, some farmers bring up the rear of the parade with a cart carrying wooden crockery © H. Hürlemann, 2001

Around Mount Säntis, the traditional cattle drives up to and down from the alpine pastures follow a defined choreography. The procession is led by Appenzell goats along with boys and girls in traditional dress. These are followed by a herdsman in full traditional dress complete with yellow breeches and a milking pail on his shoulder. Next in line are three cows wearing large dairy bells, three cattle drivers in traditional Sunday clothes with brown trousers, and another herdsman, also in full traditional dress. They are followed by the herds of cows and the owners of the animals, usually accompanied by the Appenzell cattle dog, known as the "Bläss". A cart laden with wooden crockery brings up the rear.

The heavy bells worn by the lead cows are a particular feature of the procession. They ring in harmony with each other and provide a drone accompaniment to the slow wordless yodelling ("Zauren") which is an integral part of the event. They are also the centre of attention during "Schellenschötten", when they are rung by the herdsmen, with small rhythmical movements. In Toggenburg the procession up the mountain is followed by a celebration on Alp Sellamatt, while in Appenzellerland there are three events during the alpine summer: "Alpstobete", "Jakobifeier" and the Herdsmens' Ball. The season is brought to a close with cattle shows.