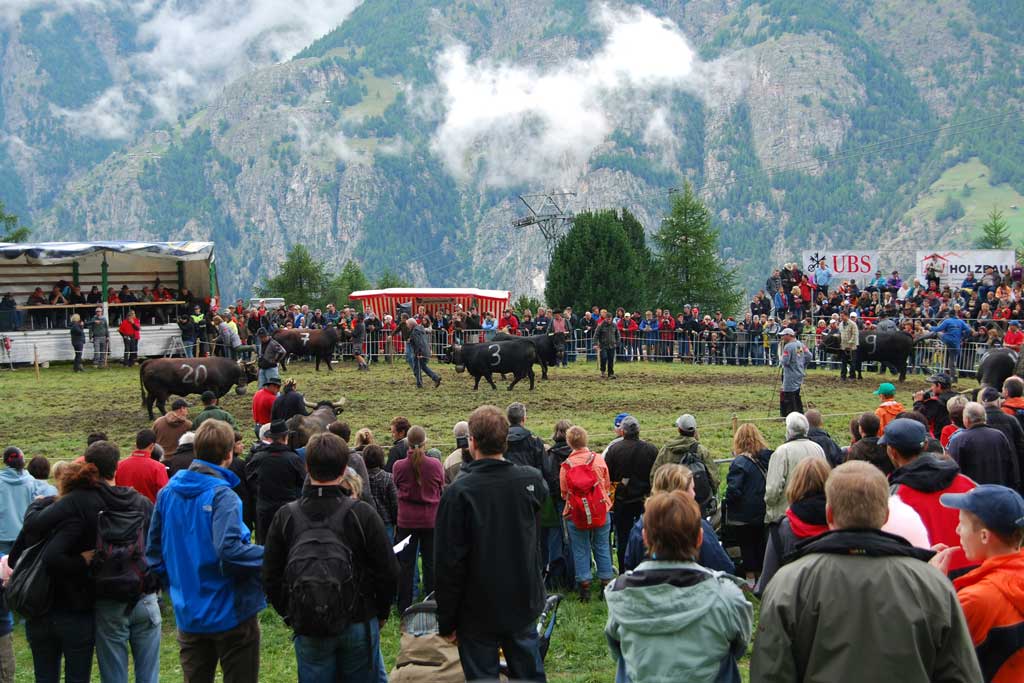 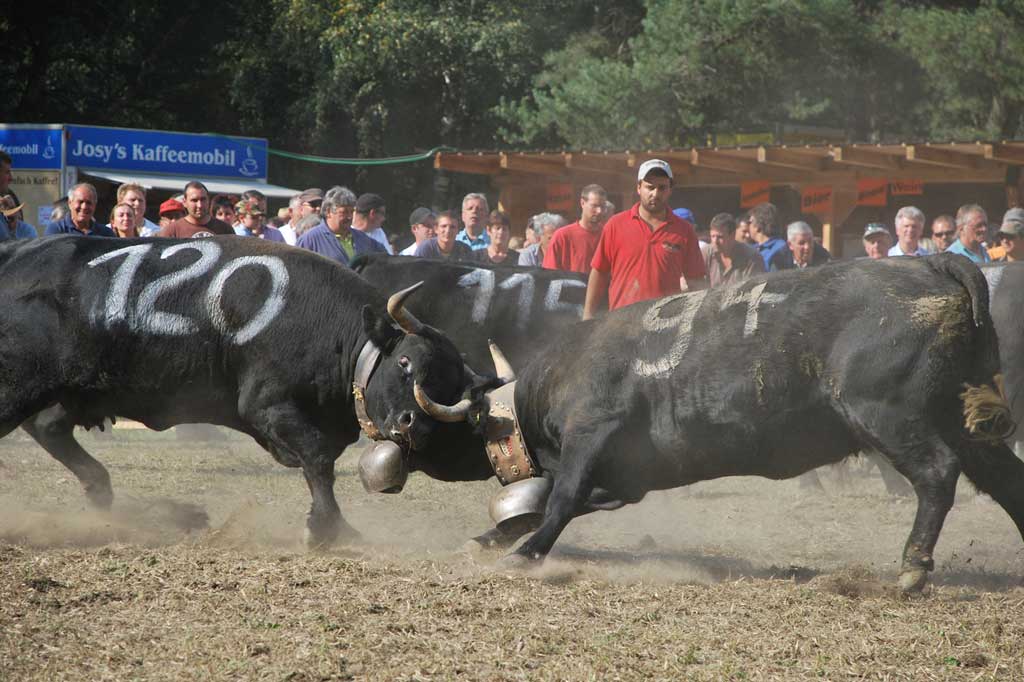 A cow fight in the Goler arena near Raron, 2011 © Walliser Bote 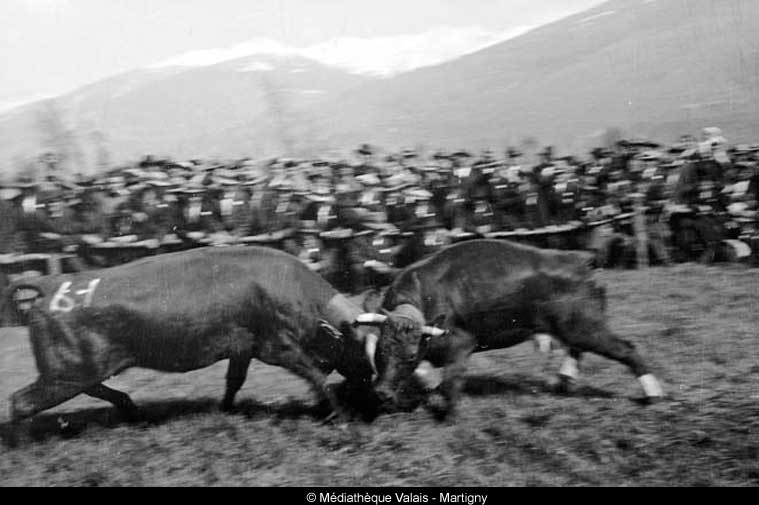 A cow fight in Vetroz in the Rhone valley, 1936 © Raymond Schmid/Mediathek Wallis, Martigny 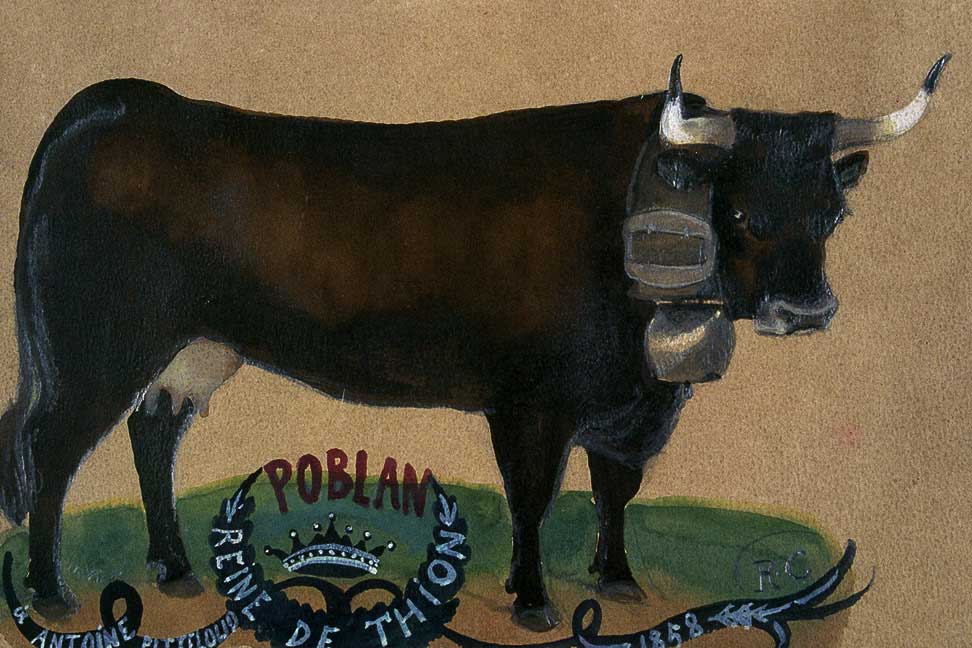 Robert Calpini (1840-1918): portrait of the fighting cow Poblan, 1858. Queen of the Thyon alp in the municipality of Sitten © Geschichtsmuseum Wallis, Sitten 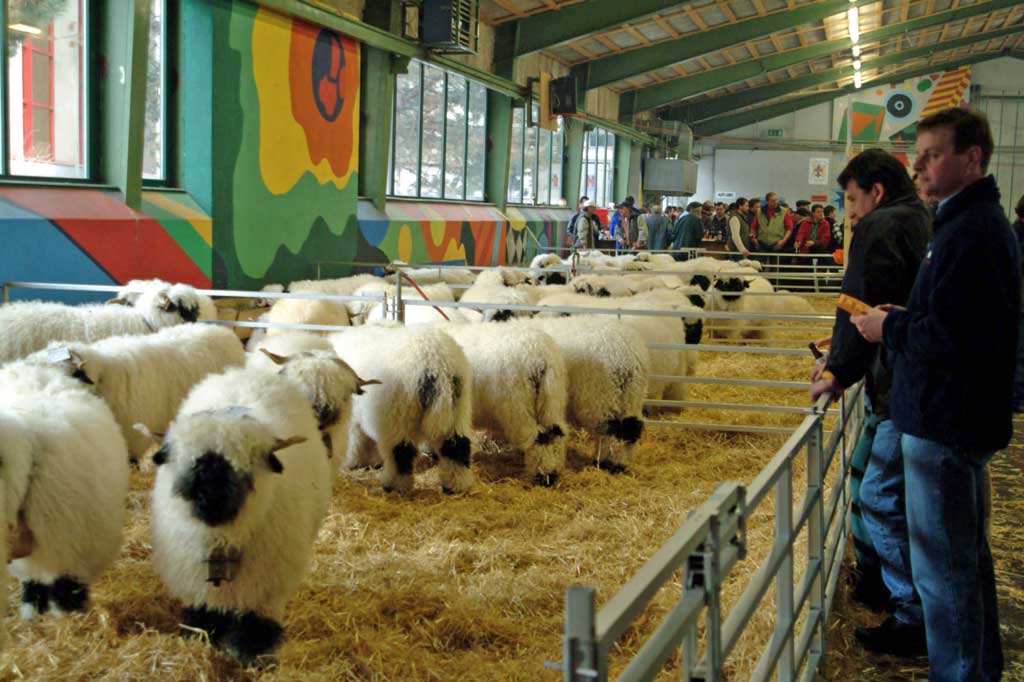 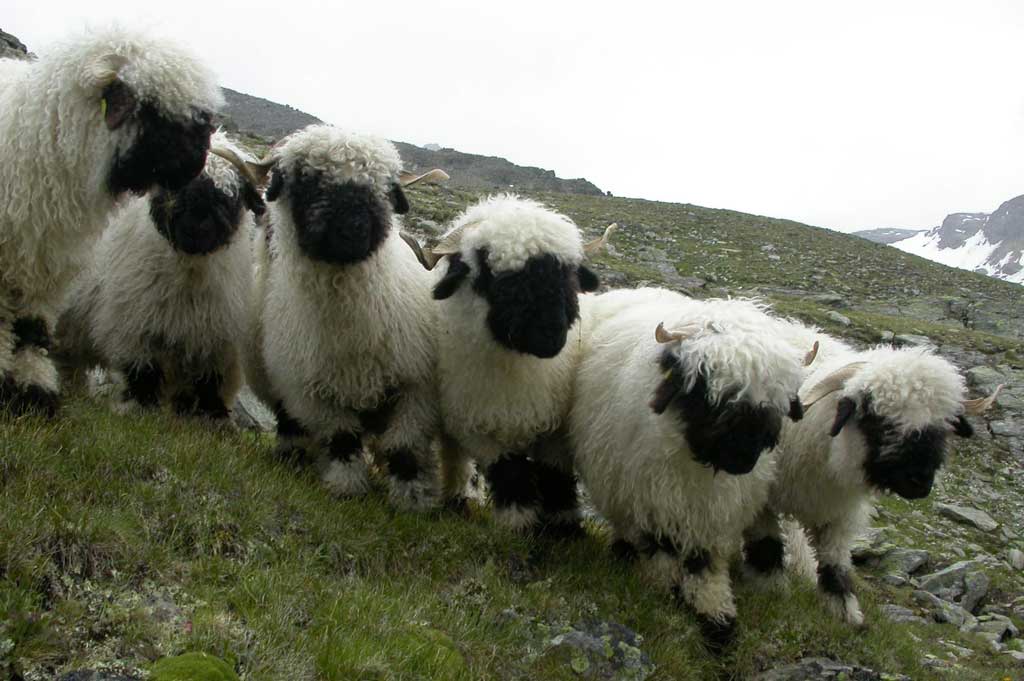 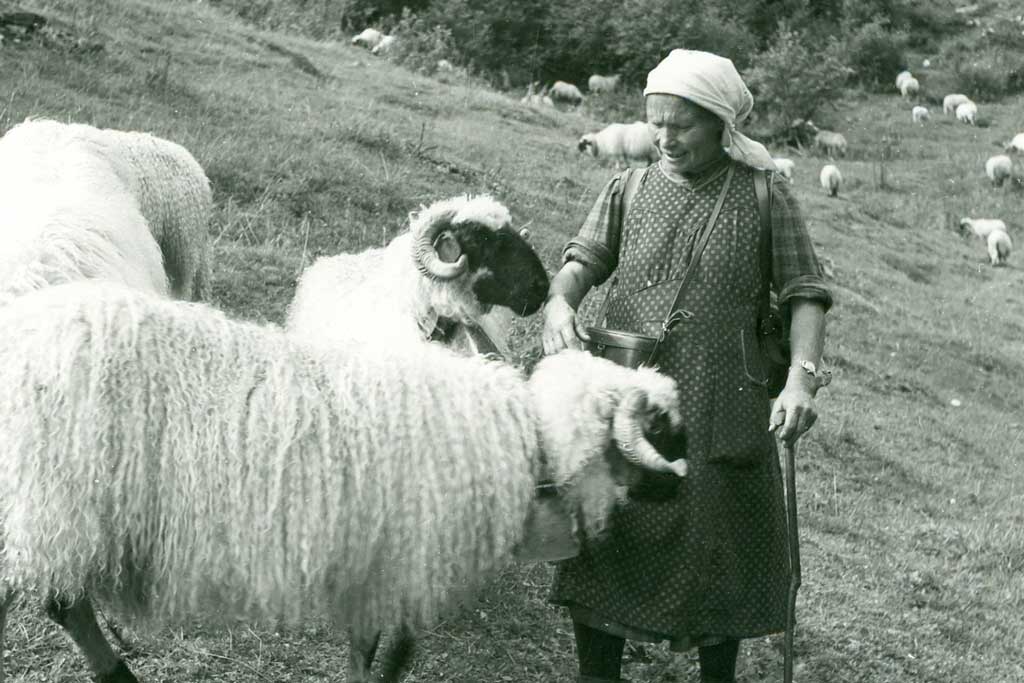 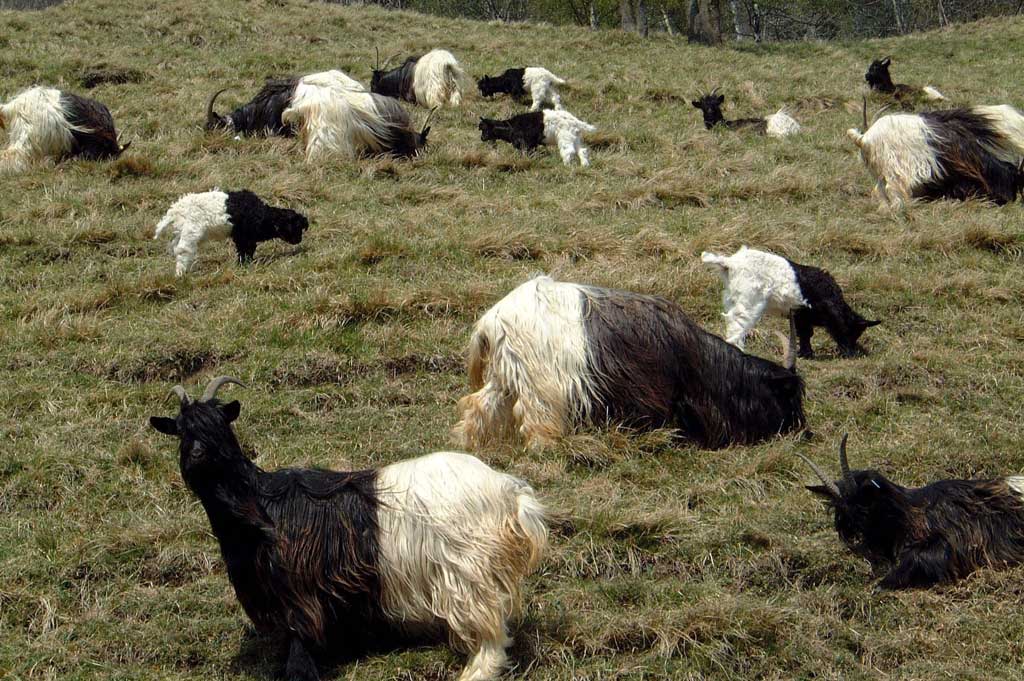 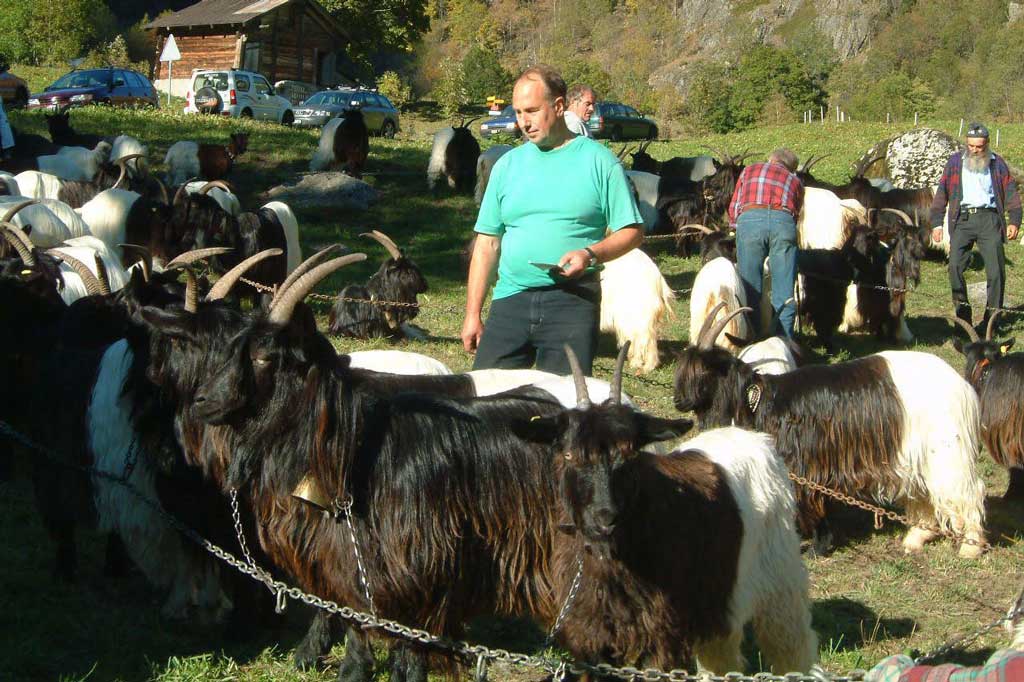 The contemporary tradition of animal husbandry in the canton of Valais revolves around the following breeds: the Herens cow, the Évolène cow, the Valais Blacknose sheep, the Swiss White Alpine sheep, the Walliser Landschaf (also known as the Roux du Valais) and the Valais Blackneck goat. Of those animals, the Herens cow occupies a special position. In addition to being very muscular, the animal is distinguished by its aggression. The cow herds designate a leader for the cow fights which take place on the alpine meadows every summer. Cow fights have been organised in the valleys of the canton of Valais since the 1920s, and today they serve as a reminder for younger generations of the significance of agriculture in the canton's history. The Herens cow has been accorded such symbolic value that it evolved into the canton's most important farm animal in the second half of the 20th century. Today, traditional animal breeds have a strong presence in the canton's festivals and rituals, functioning as important symbols of local culture and emblems of the canton as a whole. Although the tradition of animal husbandry has strong ties with the past, it continues to evolve under the influence of modern trends and retains its significance to the present day.